"You light up my life" Song lyrics

James Lee Burke is one of my favorite authors and "Light of the World" is one of his finest books. The story takes the reader to the Montana countryside where Dave Robicheaux and Clete Purcell are vacationing.

Dave's daughter, Alafair,  is jogging on a mountain path when someone shoots and arrow that barely misses her. Other events happen which lead Dave to believe that
Alafair's life might be in danger.

Alafair is a writer who had interviewed mass murderer, Asa Surrette, when he was in prison. She wanted him to admit other crimes and lessen the grief of these other families who were Surrette's victims.

Clete's daughter, Gretchen, takes offense at a sexist comment made by a local cop and the consequences are severe.

Gretchen was filming a documentary about land use in Montana and those wanting to spoil it for their own personal riches.

Another character we meet is a brave man who works at a rodeo. He tangles with a wealthy family, the Youngers and the repercussions are elegantly described.

The setting is beautifully described with the mountain rivers and the land seen in its most lovely manner.  James Lee Burke also displays his characters in a way in which the reader gets to know them and for the reader to feel as if they are part of the action.

Highly recommended and in my opinion, a candidate for literary awards.
Posted by Unknown at 2:19 PM 5 comments:

A stretch of the imagination

Four beautiful women go on a vacation to a luxurious spot in Monte Carlo. They all come from marriages where the spark of love is missing.

After enjoying the festivities, the women meet a number of men and continue their partying to a rich man's yacht.

They are unaware that their husband's have followed them and have their own plan to punish their unfaithful wives.

The women also are unaware that one of the men they are with is an influential politician in disguise.

Something happens and people are killed, the women end up on trial.

This is an entertaining read but, possibly since it was written by two authors, the story is disjointed and there are too many coincidences that seemed improbable. I could recommend the book as an easy summer read.
Posted by Unknown at 9:44 AM No comments:

A novel dealing with mistreatment of teenage boys by adults

There are many aspects to this complex novel.

A quiet cul-de-sack in England is changed when a family named Pearson moves in. Something about the history of the head of the family is discovered and neighbors become merciless in their treatment of the family.

Eric Pearson has called police about evidence he has on a case of national interest but when police review his information they feel it is uncorroborated and insufficient for further action. Pearson also takes photos of the neighbors as they pick on his family.

His family lived in a commune called Children of Solomon Pearson is charged with inappropriate behavior there and so is asked to leave the commune. He is bitter about this and feels the action was taken without sufficient proof.

Meanwhile there is a man found guilty of crimes against children but claims others were also involved. The case doesn't seem to be going anywhere until the body of another teenage boy is found.

Besides a story dealing with a delicate subject, the author details the emotional toll this has on officials investigating the case.

I enjoyed the story but felt it was slow to get started and there were parts of the book that were difficult to read due to the subject matter.
Posted by Unknown at 5:03 PM No comments:

"You're a devil in disguise" song lyrics


A thriller based on a true story, "Speak of the Devil" is a novel with much of the story taken from real MS-13 cases. There are villains in abundance with this particular gang reigning havoc in the Washington, D.C. area.

The story tells of a gutsy young woman, Anna Curtis whose position is a sex crimes prosecutor. Characters are the key to most well written novels and in this story, the characters leap from the pages. At the start of the novel, there is a horrific murder with men charging into a brothel and decapitating one of the employees. It seems like an open and shut case but witnesses are reluctant to come forward.

Anna's boyfriend is Jack Bailey who is at the U.S. Attorney's office, chief of the Homicide Unit.

There is biting social commentary on a legal system that fails to protect witnesses. We also have a love story between Anna and Jack and we become part of their wedding plans. The author writes an intelligent novel and asks about the ways that love can prevail over violence.

I don't want to get into the plot but found the story one I couldn't put down. It is an excellent read with real situations and mounting suspense.

Giveaway Rules:
1. be a follower of this blog
2. Use above link and see my Amazon review. At the end of the review, please indicate it was helpful.
3. Leave your email address for contact purposes and indicate steps one and two have been completed.
4. Contest ends August 30th.
5. U.S. and Canada only 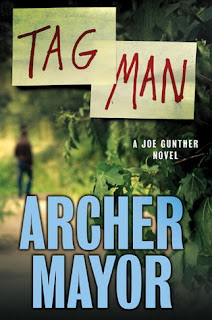 A housebreaker is entering the homes of wealthy residents and leaving a note that they've been tagged. Then the housebreaker usually helps himself to a snack and leaves.

Another home he breaks into has an old suitcase that a man staying in the home had in the basement. The housebreaker spots evidence of what might have been mass killings that took place years ago but doesn't know what to do with this.

The thief uses the name Dan Kravitz and wants to return to this home a second time to see if he can get more information that might be useful to the authorities. However, the man is waiting for him and in a confrontation, Kravitz barely escapes.

The man who was doing the hit on Kravitz takes him too lightly and, what happens, brings the police into the story. The lead police officer is Joe Gunther of the Vermont Bureau of Investigation. He and his men lead the investigation.

The suspense is properly maintained and the author provides good descriptions of the various cities in Vermont where the story takes place. The dialogue is also nicely handled.
Posted by Unknown at 3:02 PM No comments:

"Never go back", an excellent thriller.

I'm an avid Lee Child fan and was delighted to have the opportunity to review his latest Jack Reacher novel, "Never Go Back."

In this engaging thriller, Jack Reacher returns to his old unit from the snows of South Dakota to the 110th MP Special Unit in the Washington, D.C. area.

Things aren't what he expected. The commanding officer he wanted to see is in jail and there are charges against Reacher from when he was on active duty. Also, because of the current military situation, he's ordered back to active duty in order to face military charges.

The central story focuses on Jack proving these charges are wrong and getting the prior unit commander out of the difficulty she was in. Since there are members of her unit recently deployed to Afghanistan, Jack considers if any of her difficulties might relate to there with everything that goes with military downsizing.

The substance of the story still rests in Jack's ability to get out of difficult situations with his strength, bravery and knowledge of how things work and what is wrong with a current theory.

The descriptions of the land are entertaining as Jack and the former commander of the 110th have to avoid those chasing them including members of a moonshiner's family who they run into along the way.

A page turner not to be missed

Jason Kolarich is a hotshot attorney who has been on both the prosecuting and the defense side of courtroom battles. In this novel, he is fighting off the effects of his oxycodone addiction.

Maybe his mind wasn't as sharp as normal but he agrees to see a man who tells him his name and that he will be accused of murdering two women who he knew but had nothing to do with their murders. He's sure that he's being set up.  Jason tries to get him to go to the police but the man is unwilling to do so and Jason is bound by the attorney client privilege.

Two other women are murdered and Jason feels obligated to let the authorities know about this client. When police look into the client's activities, the client calls Jason and tells him that he betrayed him and that the result will be painful to Jason.

Jason ends up being tried for murder. He's defended by his best friend and partner, Shauna Tasker. From this point on, the novel moves from events at the trial to events leading to the trial. An additional character, court reporter Alexa Himmel approaches Jason and she and Jason form a relationship.

Although Jason is warned to be leary of Alexa, if she's all she claimed, it is Jason's own intuition to be weary of what is going on as Alexa becomes more assertive.

There are a great many twists and surprises in the novel which the author manages to create while providing the reader with a gut wrenching novel.

I received a free copy of this book from LibraryThing and look forward to reading more stories from this excellent story teller.
Posted by Unknown at 7:00 AM 2 comments: