"I would have followed you my brother. My Captain. My King." Lord of the Rings 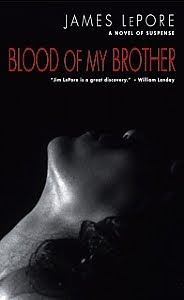 This is a novel that deals with important issues, friendship, loyalty, integrity and justice.
Attorney Jay Cassio's best friend, Dan, is murdered, apparently by professionals. Jay feels that he owes it to his friend's memory, to find out why Dan was killed and then punish the killer.
Dan had told Jay that a woman named Donna Kelly was holding some money for one of Dan's clients, Bryce Powers. Now Bryce and Bryce's wife Kate were dead in what police say is a murder suicide. Donna told Dan that she would pay him for bringing the $500,000 to her in Florida.
Jay and Dan had grown up in the mean streets of Newark, New Jersey at the time of the racial riots of 1967, which burned out much of Newark's slowly dying downtown. Both of the boy's families remained in Newark as the city slowly died around them.
There is a parallel story taking place in Mexico City when a beautiful girl named Isabel has been placed in a convent in 1977. In 1991 the man who visited her periodically and she called Uncle Herman, sees her developing into a beautiful woman and removes her in order to work for him.
Jay is warned against continuing his inquiries into the case of Bryce Powers' death. Then he learns that the attorney general in Mexico is named Lazaro Santaria and that he has a brother named Herman. Jay has seen Herman's name in some of the papers from Bryce Powers.

After confronting the FBI agent in charge of the case, Jay travels to Florida to look for Donna Kelly. He is accompanied by his friend, Frank Dunn, a recently retired police officer.
The tension mounts as two Mexican gunmen are looking for Jay and for Isabel (Donna Kelly). Isabel is on her own in Florida but has enough information about Herman Santaria and Herman's brother that they want her dead.
There is plenty of action and the characters are well described and most sympathetic. It is as if Jay and Isabel are two innocents and the reader becomes hopeful of their success against the killers. Will they find love together? How could they succeed in bringing down someone who has such power in the Mexican government? Will the FBI agent be able to use manipulate the law to serve his own ends and advance his career? The answers to these questions will keep the reader turning the pages and forgetting about everything else as the story unfolds.
Please check out my review on Amazon and at the end, indicate that the review was helpful.
Thanks.
http://www.amazon.com/review/R3UILDHJW6EY9N/ref=cm_cr_rdp_perm
Posted by Unknown at 2:13 PM

Hey Mike, Dany from 100 Book Challenge here. Sorry about straining your eyes. I have changed the background. It is now white with black text. I hope it suits your eyes better.

Hi Mike!!! Just stopped by after reading your message on Goodreads.

I love meeting fellow book addicts! Come check me out if you have a minute: