Still, though I loved you so. Lyrics 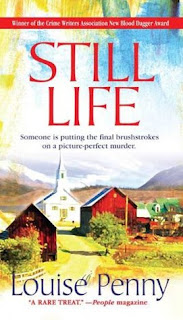 "Still Life" is my book club's pick for the month.

In the story, Chief Inspector Armand Gamauch of the Surete and his team are called to the rural Canadian village of Three Pines.

There, seventy-six Jane Neal had been walking in the woods by the village when she was shot and killed by an arrow. Is this an accident or murder?

The incident took place on the Sunday of Thanksgiving and the investigation takes on a festive air as the team searches for answers amongst stores and buildings decked out of the holidays.

The reader is given the full imagery of Louise Penny's imagination as the scene of Jane Neal's death is described as seeing her fall on her stomach and making snow angels before her death.

Gamache investigates the murder in a way that reminded this reader of what Alfred Hitchcock would have done. The dialogue is well versed and the characters are imaginative and become like old acquaintances to the reader.

During the story, Gamache shows himself to be a keen investigator and teacher as he attempts to teach a new member of the team during his steps in finding answers.

The book has won multiple literary awards and brings the reader into the story as if they were a member of the village.

I totally agree with your thoughts on this book.

My book club read this last fall and it was my first Louise Penny novel. The style of writing (character and location driven) reminded me a great deal of Donna Leon's Brunetti series set in Venice (which I love and only lack having read the most recent). I plan to continue on with this series.

Thanks Heather and Kelly;
We're all in the Louise Penny fan club. She's a heck of a writer.