"Dead or Alive" by Michael McGarrity 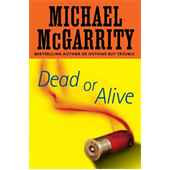 Readers who enjoyed Gunsmoke and Bonanza in the early days of TV will enjoy this plot driven novel if they can accept the novel's brutality.
"Dead or Alive" is an exciting adventure of the modern day west.
Craig Larson is one of the truly villainous characters in recent times. His killing spree is reminiscent of the legendary villain, Blue Duck, from "Lonesome Dove."
Later in "Dead or Alive," when Larson decides that he wants to kill cops, he reminded me of Blue Duck who met Gus McCrae at one point in that novel and uttered one of the more memorable lines in that novel. "I ain't got time to waste on killin' some old Ranger with holes in his underwear.
There's plenty more need killin'."
In "Dead or Alive," through a case of mistaken identity, Craig Larson is being transported to a minimum security facility. He has already killed two times and manages to escape during his transportation and begins a killing spree.
As he evades capture, his murderous activities become increasingly gruesome. His murders include forcing drugs down a former girlfriend's mouth, causing her death, beatings, shootings and arson.
His bullet turns Sheriff Paul Hewett into a paraplegic and when Lt Clayton Istee is passed over for promotion due to political reasons, he resigns.
Clayton is Kevin Kerney's half Apache son and in this novel, Kerney is retired from his position as Sante Fe Police Chief.
When Larson's first killing is Kerney's partner, Riley Burke, Kerney and Clayton team up to track Larson down. They are sworn in as special investigators for the New Mexico State Police and as Larson becomes more unhinged the only question is how many more people will Larson kill before he is caught and dealt with.
While this novel is entertaining, it is very violent. The author never develops the reason for Larson's hatred and his motivation in killing. In addition, McGarrity has gotten away from his descriptive ability in making the New Mexico territory live in the mind of the reader.
McGarrity can tell a story that keeps you guessing but I don't think this is one of his better works.
Mild recommendation.
Posted by Unknown at 9:11 AM