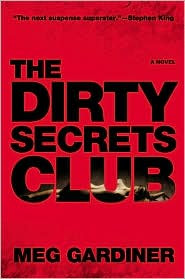 I began this novel with great anticipation after reading praise from various authors. Stephen King commented that if you like Sue Grafton or Janet Evanovich or even Lee Child then the reader would enjoy this work. It is also listed at least in one publication as among the best mystery novels of the year.

"The Dirty Secrets Club" begins with San Francisco experiencing a number of small quakes while at the same time a group of well known people have committed suicide and even murder.

Jo Beckett is a forensic psychiatrist who has been asked to investigate what connects the victims. She is a likable character who is still getting over the death of her husband while on a rescue mission to take a young girl to a hospital for emergency treatment.

Jo discovers something called the Dirty Secrets Club, which, requires applicants to submit a resume giving a secret, shameful deed about themselves before they can be admitted.

People join the club because they are troubled because of their past and they need a place to unwind with other people who would understand because they too have done bad things.

However, someone begins blackmailing club members, threatening to reveal their secrets, driving a number of the group to suicide.

Jo almost prevents one suicide which takes place in front of her and when she reads the note the victim left behind, Jo is informed that the club plays games on the edge and they must have crossed someone. Since these games are played while the members are in disguise, the person who was crossed wants the names of the rest of the club to track them down and kill them.

With the fast moving action, we learn that a character named Perry was a low level racketeer and that the club members stole $500,000 from him and left him to die, now he wants pay back.

Gardner's descriptions of San Francisco and the character development of Jo are done nicely but some plot devices are too extreme for belief. Why these intelligent people wouldn't have forseen the possibility of blackmail is not acceptable. At one point another earthquake enables someone to escape from the courthouse and Perry's advocate got a job in a delicate position without finding a significant part of her background.

Be that as it may, if you can suspend belief for awhile, sit back and enjoy reading an adventurous work
Mildly Recommended.
Posted by Unknown at 6:31 AM