The one who cannot restrain their anger will wish undone what their temper and irritation prompted them to do." Horace

In rural Atlanta, a badly injured woman is hit by a passing car. She is alive but in critical shape. A torture victim.

Will Trent, a detective with the Georgia Bureau of Investigation goes to the accident scene and finds a cave where at least two victims were tortured. The local police resent his intrusion in their case. They order him to leave but before he does, he discovers a second victim, recently deceased.

As I was reading this story, I was surprised by the number of plot similarities between this 2009 novel and Lisa Gardner's "Hide" which was published by Bantam, January 30, 2007.

Both novels have an underground chamber, or room, in which victims are placed. The victims are either murdered or tortured there. Both novels have antagonists with a family connection. Both have an antagonist that was in need of mental care and both stories have a compassionate male protagonist with a no nonsense law enforcement female partner.


I enjoyed both stories and both contained a surprise but the similarities in plot was distracting. 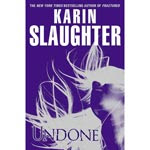