"During times of universal deceit, telling the truth becomes a revolutionary act" Orwell 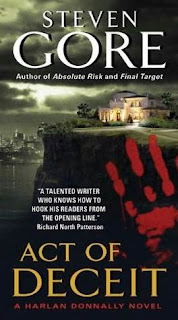 
Harlan Donnally was a former San Francisco Police Dept. detective who was retired on a disability after being shot on the job.

At the start of the story, he promises a dying friend to find his friend's younger sister, who his friend placed in a home when she was age five. Tragically, Harlan finds that the girl, Anna, was murdered years ago and her alleged killer, Charles Brown, was never prosecuted due to being incompetent.

As Donnally continues to search for answers, he finds that there are people who would like to keep Anna's killing closed and prevent him from finding the answers. However, he persists. He needs to find out what happened in the 1970s in the Berkley community with the anti government, anti war movement.

Donnelly feels that he's on a mission to help his deceased friend who thought he was leaving his little sister in safety only to have her killed and no one punished for the crime.

Donnally is able to locate the alleged killer, Charles Brown, and bring him to court only to have someone hire a wealthy attorney claiming that Brown is the real victim. This makes Donnelly wonder if someone else is hiding behind the incompetent man's craziness.

We learn more of Donnelly's past and realize what motivates him in this search for the truth. His search takes him to places that neither the reader nor Donnelly could have foreseen. This freshness in plot is dramatically described and we see Donnelly as the type of investigator who doesn't give up and employs some creative measures to get answers and deliver justice that has been a long time in being served.

GIVEAWAY RULES:
1. be a follower of this blog
2. follow on shelfari if you are on that site
3. use above link and see my review on Amazon, read review and at the end, indicate "YES" review helpful.
4. under comments of this review, indicate you wish to be entered in the giveaway, give your email address for notification and indicate you have stated that the review was helpful.
5. Giveaway runs through Sept 16th
6. U.S. and Canadian residents only, sorry, postage.

Good luck and have fun.
Posted by Unknown at 3:14 PM

Wow Act of Deceit sounds sounds wonderful. Thank you for sharing and for the wonderful giveaway opportunity. I found the review on Amazon very good and it certainly made me want to read this book even more. I of course hit yes that the review was helpful, because that indeed is true. My fingers are itching to get hold of this awesome read and I have added it to my wishlist. Thank you for sharing and I am glad I follow you site:)

Thanks for the giveaway. Please enter me in contest. I would love to read the book. It sounds very good. Tore923@aol.com

Oh you know how much I love all these mystery,action filled books so I'm totally up for it!

GFC: kimyunalesca
like your review at amazon
email subscriber

Great review! i would like to be entered, I have done steps 1-3 and my email is jennyerin1077(at)gmail(dot)com
Thanks Mike!

Sounds like another winner, Mike! You have a good eye for suspense books, which I like to review. Please enter me, and yes I visited your review on amazon.
Rae, Best O' Books Reviews
bestobooks@gmail.com

Sounds like an interesting book Mike. I am off to Amazon to enter the giveaway! kittycrochettwo at msn dot com

Hello, I would love to be entered! I am a GFC follower and I indicated 'yes' on your review at Amazon.

This sounds interesting I love a good murder mystery. Thanks and I follow on Twitter Cenneidigh. lisapeters at yahoo dot com I would love to win this thanks

I would love to be entered in this giveaway! This looks like a really good book, and one I would enjoy reading:)
I am your friend on Shelfari: Julie Witt
I liked your review at Amazon!
jwitt33 at live dot com

Enter me in the giveaway pleas!
I am already following you.

I tried to find you on shelfari.

I went to your review on amazon and clicked yes that the review was helpful.

Following on GFC (Darlene), Shelfari (Darlene), Liked your review and commented on Amazon.

Please enter me in the giveaway!

Thanks for the giveaway!

Thanks for your very kind review of Act of Deceit. I know you have many choices in books, so I appreciate you taking the time to read it. Your giveaway of the book is a great idea as it gives another reader a chance to try it out.

I also appreciate the Orwell quote as it really does capture Donnally's mission not only in this story but in the ones to come.

Thanks for the giveaway chance to win.

I would like to win and read Days of Deceit. I have marked your review as helpful on Amazon. I am a follower. I am trying to find you on Shelfari as well. Thanks for entering me in the contest.

I am a follower via GFC: PiinkPoodle
I clicked "yes" on your review being helpful on amazon.com.
Thank you for your review. I would love to read this book :)
Please enter me in this giveaway =)
Thank you so much for the chance.

Follower - thanks for the review (and heads up about the contest). I visited your review on Amazon and hit yes.

I am a follower of your blog and would love to be entered for this interesting sounding read!

I want to be entered. Your review was helpful as always.
ejcoppersmith at yahoo dot com

Glad to hear you made it through the hurricane relatively unscathed, Mike. We in South Florida have a lot of empathy for the people in the Northeast who had to deal with it!

Please enter me.
I follow via gfc
I like your review on Amazon
mamabunny13 at gmail dot com

This sounds like a very interesting story. One that I would love to read.

I clicked yes that your Amazon review was helpful.

Thank you for the giveaway, it sounds like a good book! I follow your blog and I found your Amazon review helpful

This book really sounds good, Mike. Your review was very helpful to me on Amazon.

Thank you for hosting this giveaway!

Another great review Mike. Like it a lot and would love to read this book. Please enter me.
dian429@yahoo.ocm

Congratulations to the winners of the giveaway of "Act of Deceit"
Pink Poodle
Romance Girl
Linda Kish.

I thank everyone from participating and wish I had enough books to send to everyone.

Please look into my new giveaway of "Shelter" currently at my blog.

Thank you so much for hosting this giveaway. I just received the book in the mail. I can't wait to read it.