What is in the marrow is hard to take out of the bone. 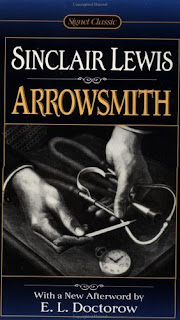 The reader sees the difficulty of attening medical school and dealing with medical and social issues. Martin goes through medical school with the ardor of a man pursing his lifelong dream. When he takes bacteriological, he imagines that he's in the position of his instructor Professor Max Gottleib and can't imagine that life could be better.

Working so hard, there were times when he needed a change of pace and he visited a city called Zenith where he met Madeline Fox who was working on her grad school courses and seemed to be searching for a husband. Eventually they become engaged and soon after Madeline proceeds to attempt to change Martin's habits and mannerisms to the man she would like him to be.

Then he's sent to Zenith General Hospital where he meets a nursing student Leora Tozer. They become attracted to each other and have more in common than Martin and Madeline. They also become engaged and Martin has the two women meet and tells them he's engaged to both. Madeline is condescending toward Leona and disparages her coming from a country place like North Dakota. This seems to sway Martin to Leora and so, Madeline leaves and wished them a good life.

We follow Martin's life as he finishes Med school and moves to Leona's home to set up a family practice. It is interesting to see small town community and ideas about alcohol, gambling, pharmacical drugs, and medicine in genera. Martin tries to fit in with the farm community and meddling family of Leora but finally it is too much and he decides to move to the city where he will have more freedom.

His true love is really in research and eventually takes a position there. During the WWI he and joins the military and works in research about medical conditions that people in the military might face. This devotion is good to read and he tries to write some research papers, eventually working with bubonic plague.

Well written and a good description of a piece of America in the early nineteenth century.
Posted by Unknown at 9:33 AM