"Be nice to nerds. Chances are you'll end up working for one." Bill Gates 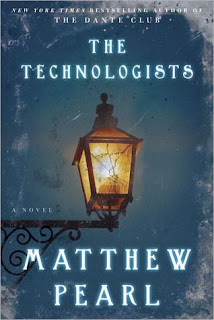 In April 1868, a number of ships in Boston Harbor have their instruments fail simultaneously creating panic and great damage. Officials want to turn the investigation to the Harbor Police but one suggestion is to ask the professors at the MIT, which was about to graduate its first class.

We follow the students, including Marcus Mansfield, who are listening to the school's president discussing the new technology that would combine the city lights on a circuit, saving the time and expense of having to light each street light individually. The speech is broken up by trade unionists, claiming that this innovation is depriving many people of their jobs.

Thus, the theme of the novel, advancement in technology and cost savings against tradition and more jobs. Boston, at the time is philosophically linked to Salem and many Bostonians regard science as a form of witchcraft.

Another incident creates great havoc where downtown windows and glass seem to melt. At MIT, a professor claims that since this school is the only institution devoted to science and technology, they should investigate this second incident, even though there is public distrust.

Tradition and innovation also clash as officials turn to Harvard to investigate. Marcus Mansfield and a small group of friends from MIT form a secret group to find answers about the instruments failing and the glass melting.

Fans of Caleb Carr's "The Alienist" will enjoy this analytical and historical novel. The author has gone into great detail about the scientific process. Although admirable by itself, this can become ponderous to the non scientific reader, such as I am. I felt this slowed down the story and at times became almost tedious. While I enjoyed the history of the times and the characters who were very realistic, I would have liked the resolution to be given in a less wordy manner.

Given the originality, fine dialogue and research, I would rate this at 3 1/2, moving to four stars.
Posted by Unknown at 5:45 PM

Excellent review as always Mike I really like this book and will buy it based on your recommendation.

Thank you for your nice words. I do believe that the fan of historical mysteries would enjoy this. Hope you do.
Mike

This is a must read. It would appeal to most everyone at my house.