"Pompeii has nothing to teach us." 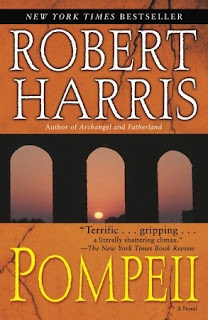 In 79 A.D. a new Aquarius is appointed, Marcus Attilius Primus, after the prior Aquarius disappeared.

Unexplained water loss occurs in the cities near Pompeii and the Aquarius is sent to find the cause and to correct the problem.

Water was a vital commodity of the day and Attilius, an engineer, feels that his position is important and his work should be done in a scrupulous manner.

As the story begins, one of the wealthy residents, Ampliatus, a former slave, is putting one of his slaves to death. This young man was responsible for caring for Ampliatus's prized fish which were meant to be delicacys for honored guests. When the entire stock of fish die, the slave is blamed.

In an attempt to save this innocent man, Ampliatus's daughter goes to Attilius who demonstrates to Ampliatus the the fish died because of sulphur in the water.

With the excellent narration of Michael Compsty, the story follows as if we are experiencing events on the History Channel.

Attilius begins to investigate a possible fault in the aqueduct while certain officials attempt to stop him because they fear that he will discover that they mishandled the water supply and made huge profits from overcharging people for the water.

There is excellent drama as the action begins two days before the volcano. We follow Attilius as he learns of an upheaval of land under the aqueduct and observes early warning signs that a volcano will erupt.

This is a highly entertaining story that shows the author's detailed research into the times and the life in the city of Pompeii. The reader becomes interested in the history as the characters come to life and a momentous disaster becomes closer and closer to occurring.
Posted by Unknown at 4:53 PM

I read another of Robert Harris' novels, Imperium, and I enjoyed it immensely. He's a fantastic researcher and a great novelist. Thanks for posting this review!

Thanks Jonathan.
I look forward to discussing books with you.
Mike