"When men are innocent, life shall be longer." Emerson 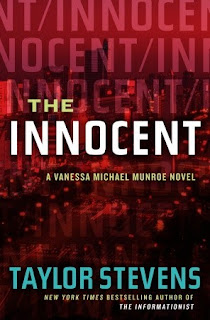 Vanessa Michael Munroe is an assassin who has nightmares about her past. She understands her killing capability and when her best friend, Logan, asks for help, she can't refuse.

Logan explains that eight years earlier, his friend, Charity's daughter, Hannah, was abducted from her school and taken to a cult known as The Chosen. Followers of The Profit, have hidden Hannah and shielded her abductor. Hannah was age five at the time and Logan and the other members of a group who have escaped from The Chosen, ask Munroe if she'll go in for her. Since Munroe came from a similar background, she accepts.

These people who had been childhood members of The Chosen tell Munroe some of the things that go on there and inform her that they know where Hannah is being held.

Munroe makes contact with members of the cult at their location in Argentina. She pretends to be interested in joining the group and bringing money that her family has accumulated.

When she does get into one of the homes, she observes the teenagers as they return from a day of begging as the means of generating income for the cult. Munroe understands the difficulty will be to see how much Hannah has been brainwashed. If Hannah came willingly, it would be easier for Monroe to get her out and reunited with her parents.

The reader understands that amount of brain washing that these children are subjected to. They are told that the outside world is corrupt and that people just make up bad things about the cult. Unfortunately, in this day where we learn of young people being abused by those in power, we learn of officials in the cult using their position of authority to get the naive children to do things they normally would not.

The setting is well described as we see the outward life of contentment in the members of the cult but then peel away the outer layer and see the corruption inside.

Munroe demonstrates moments of vulnerability but is able to maintain control. This makes her a more appealing character as she tries to deal with the nightmares about her killing. While with the cult, she understands that her physical skills would be sufficient to rescue her from danger. She has an associate who covers her back and this provides a double layer of safety.

The book is disquieting at times when we see the vulnerability of children but it is still a wonderfully evocative novel that will stay in the reader's mind with the thoughts of missing and lost children.

A. Be a follower of this blog

C: Use above link and see the Amazon review, at the end of the review, indicate "YES" the review was helpful.

D: Leave email for contact purpose and indicate that you have taken step C.

This is for an advanced copy

"The book is disquieting at times when we see the vulnerability of children but it is still a wonderfully evocative novel that will stay in the reader's mind with the thoughts of missing and lost children."
This is what makes me nervous about reading books like this. While fiction, they seemed to be telling true stories, and I'm sure some child somewhere, is living such a life.
But at the same time, this is exactly what makes me want to read such a book.

Monique,
Thank you for understanding what I was attempting to convey in my review.
Mike

This definitely sounds like a "must read" and will be on my list if I don't win. Thank you for providing this opportunity, and for reviewing the book in a straightforward, well-written manner.

I follow your blog through emails. And I provided feedback on Amazon (clicked Yes).

I loved your review - it served its purpose in that I now really want to read this book! Thanks for the giveaway and for bringing this book to my attention:)
GFC follower, Shelfari friend
I indicated yes on your review on Amazon.
jwitt33 at live dot com

Great review - The story line sounds intriguing.
clicked thru to amazon and clicked on Yes, and I really did find the review helpful
Following on GFC bettycd
tjandbcd at optonline.net
I'm from US

Sounds like a good read even though it involves vulnerable children.

This book does sound like it would be 'disquieting' - which sometimes can be a positive thing.

If I win the Giveaway, my email is:

Enter me please Mike. Thank you.

Please enter me in contest. I would love to read this book. It sounds very good. Tore923@aol.com

Great review and I would love to read. I don't understand how adults can be so cruel to children but it just keeps happening. I love mystery, thriller's, and romance especially with women who kick butt..lol

I am email subscriber
Left "YES" with comment on Amazon

Thanks for the opportunity to enter giveaway.

wow your review really made me want to read the book.I said yes on Amazon &email follower.

After reading your review I truly want to read this book.Thanks for having this giveaway. I am a follower

I follow you. Thanks for contacting me and writing such nice words--you always do! This book sounds intriguing. I follow you on Shelfari, and I clicked on yes after your review on amazon. Thanks!
ruthaw_1974@yahoo.com

I checked out the Amazon review and checked yes. This seems like a wonderful book.

Awesome review! I "liked" it. Thanks for the giveaway!

Nooooooo! I'm from the Philippines so I can't join. It's all good though, will keep an eye for the release date.

You're a man after my own heart Mike! I can't wait to read The Innocent, I so enjoyed The Informationist.

I liked your Amazon review :-)

Forgot to leave my email address:

The book sounds interesting, something I want to read. I have done the steps for entering the give-a-way, and wish good luck to all! e-mail dsafford001@gmail.com

Thanks for the giveaway. I am a follower and liked the review

Following you on GFC (Darlene)

Following on you Shelfari (Darlene)

"Liked" your review on Amazon

Thanks for the giveaway!
darlenesbooknook at gmail dot com

gfc follower: nicolesender
Visited Amazon & indicated "YES" that your review was helpful.
Would love to read this book.
nicolesender(at)yahoo(dot)com

This book looks great ... a real "edge of your seat" kinda book. Thanks, as always, for the opportunity! I've completed all requirements!
Cyndi (aka Small Footprints)
reducefootprints at gmail dot com

Congratulations to the winners of "The Innocent"
Patricia Madley
Ana
and Jaidis.
Hope you enjoy the book and to everyone else, thank you for entering the giveaway. Please continue to join in. It's fun.
Mike