"The Finder" by Colin Harrison 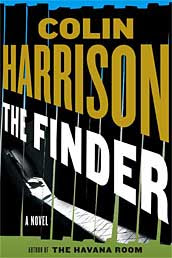 Colin Harrison's "The Finder," is a story of love, greed and integrity.
Ray Grant is the son of a retired New York police detective. Ray participated in the 9/11 rescue as a New York Fireman. He experienced the death of his partner in such a psychologically devastating manner that he takes a leave of absence.
His girlfriend, Jin Li, is the manager of a cleaning service that has been sifting through corporate documents that they were supposed to be shredding and disposing. They are able to find valuable financial records allowing Jin Li's brother in China, and the people he advises financially, to act on insider information and manipulate the stock.
One corporation affected is Good Pharma and their stock begins falling dramatically when one of their products hits a snag in its development.
The corporation becomes aware of the document theft and Tom Reilly, a corporate exec tells his security chief to teach the cleaning service a lesson.
The security chief contacts people he knows who own a septic company.
The septic company has two trucks follow Jin Li and two friends to the beach in Brooklyn and as Jin Li is away from the car momentarily, the trucks wedge the car between them. Then the truck drivers break the sun roof of the car, attach the hose of the truck and fill the car with septic sludge, suffocating the car's occupants.
Jin Li runs and hides. Her brother, Chen, comes from China to find his sister because his source of financial info has been eliminated.
Chen orders his goons to kidnap Ray and they threaten to kill Ray's invalid father if Ray doesn't help them find Jin Li.
In the meanwhile, Bill Martz, a wealthy investor, who has seen his investment in Good Pharma reduced by 30% is after Tom Reilly to explain why.
The action moves to Jin Li's fight for survival, Ray's search to rescue her and the people from the septic company who botched up the murder and want to eliminate a witness.
Harrison's narrative style works well, moving from one character to another while keeping the reader's attention. His characters are well drawn and the plot moves along with intelligence and style.
A newspaper reviewer rated this as one of the top ten mysteries of 2008 and I agree.
Highly Recommended
Posted by Unknown at 10:38 AM