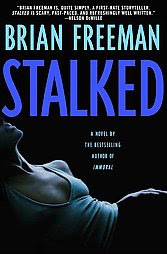 In Brian Freeman's "Stalked," a prisoner who is being transported to prison, escapes and vows to seek revenge on the people foolish enough to cause his incarceration.
While this is happening, Lt. Jonathan Stride is back in Duluth, Minnesota where his former protege, Maggie Bei, wakes up from a drunken sleep to find her husband murdered. Her police gun is at his side and she is the suspect.
When Stride offers to help, Maggie holds back. She has secrets too humiliating to divulge.
In addition, due to his former working relationship and friendship with Maggie, Stride has to appoint one of his detectives to lead the investigation into the murder. Stride tries his best to help without stepping on his detectives toes or doing anything that might be thought of as a conflict of interest.
There is an adult sex club in town and women who perform at the club are later being raped.
In addition, Strides girlfriend and lover, Serena Dial has opened a PI business and she is hired by the county attorney, Dan Erickson, to pay off the person blackmailing him.
The plot moves back between parts of the story and the reader follows the blackmailer's thoughts as he sets a trap for Serena, the person who was responsible for putting him in jail.
Freeman's writing continues to hold the reader's attention while maintaining a constant level of suspense.
The action is continuous and Freeman's descriptions of the winter in Duluth, Minnesota are vivid. I found the story engrossing but did have trouble with two of the character's similar names, Serena and Sonia.
Highly Recommended.
Posted by Unknown at 6:08 PM