Make sure you check the small print. 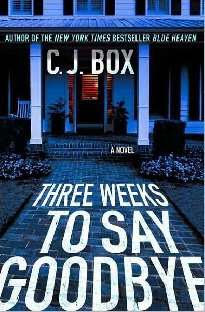 "Three Weeks to Say Goodbye" by C.J.Box tells a story that concerns adoptive parents' worst nightmare, something going wrong with the adoption.
Jack and Melissa McGuane have adopted little Angelina nine months ago. The adoption agency calls and tells them there has been a terrible mistake. The birth father never signed away his rights to the child and now has decided that he wants to raise his daughter.
Calls to their attorney go for naught, he tells them that the boy's father is an influential judge and that he has a hearing scheduled in his court so they should find different representation. When they meet the boy, Garrett, and his father, the Judge, something seems eerie about the way Garrett leers at Malissa. As the story progresses, Garrett seems more and more sinister and his father is just as bad.
C.J.Box is a wonderful storyteller. His stories had a hero of Joe Pike until his stand alone novel "Blue Heaven" which won an Edgar and now has been opted for film. In this novel, the feeling of tension mounts and it looks like the couple may loose Angelina and the little girl might be raised by someone who could put her at risk.
The writing style is similar to the naturalistic style popular early last century. Seen in Stephen Crane, and Theodore Dreiser in "An American Tragedy and other works. Naturalism is where humans are helpless or nearly helpless victims of natural and social forces. Whatever happens to them, is beyond their control.
In "Three Weeks To Say Goodbye" we have the fickle finger of fate playing dirty tricks, from the birth father never signing the release forms, to the adoption agency not catching the discrepancy, to Garrett's father being an influential judge, to Jack's having to go on a business trip at the start of the crisis in order to save his job. Each step places another layer of victimlology in the fate of Jack and Melissa.
So much sadness only paves the way for what might follow Jack and Melissa do have a small cadre of friends who take matters into their hands.
Box tells an intelligent story that the reader will feel was worth the time spent and enjoyed the tale.
Recommended.
Posted by Unknown at 1:48 PM