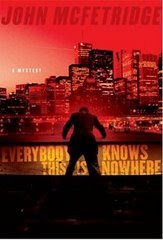 "Everybody Knows this is Nowhere" by John McFetridge.
Gord Bergeron is a detective on the Toronto PD. He's recently returned from admin duties while his wife was fighting a losing battle with cancer. His partner is Det. Armstrong.
The reader doesn't have to wait for the action to begin in this dialogue driven story. A man falls or is pushed from a high rise building, a 10 year old girl is abducted, there are immigration issues and drug deals are rampant.
Sharon MacDonald is a dealer who wants Richard Tremblay to front her 4lbs. of weed. He has a condition. There is a new competitor in town named Ray. No one knows much about him. He's offering low cost weed at great quantities and Richard wants Sharon to get to know Ray and see if he is a cop.
Richard is part of a group of dealers who started in Montreal. Then he relocated to Toronto and now he wants more control of the action and to raise the price of his product.
Sharon and Ray become friends. He is naive in many ways. They discuss partnering and moving away from Toronto. However, Richard has other ideas and they include murder.
Except for Gord, there isn't much character development. No real answers as to why these people have turned to selling drugs. However, the dialogue zips across the pages and the author tells a pleasant story.
Recommended
Posted by Unknown at 7:30 AM