"Nothing is so contemptible as the sentiments of the mob" Seneca 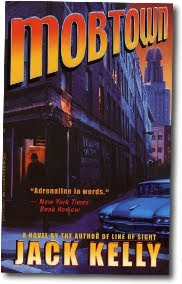 The time is 1959, Ike Van Savage, P.I. is hired by Vicky Petrone, wife of mobster, Joe Petrone. Vicky tells Ike that her husband intends to kill her. Part of her reasoning is that Joe's has become tired of her and his first two wives died under mysterious circumstances.
In this noir novel, Rochester, New York is described as a town run by the mob. We learn quite a bit of Rochester at that time, the politics, the parties by the lake and the manner that police seemed to look the other way when the mob was active.
Intersecting stories involve, Paddy Doyle, a slum landlord who owns buildings downtown and refuses to sell his buildings to the mob. Then he sees one building after another go up in smoke. Paddy asks Ike's help in bringing the arsonist to justice or he'll do it himself.
While the arsonist case is in progress, Ike is asked to investigate business owner Eddie Gill. His wife is suspicious and wants Eddie followed. Ike confirms her suspicions as he sees Eddie take a sixteen year old girl who worked for him and bring her to a night club and then to a motel.
Ike's investigations describe part of the city life, crime seems to be everywhere and the police are bought and paid for by the mob.
I enjoy this type of story with good action and what is taking place on the page is more important that a complicated plot. The dialogue is excellent and reading about Ike's exploits reminds me of the great Raymond Chandler's P.I. Philip Marlowe. Neither man takes a back seat to threats and get the job done at all costs. It's easy to visualize what is happening when the reader is given words like this, "We looked at each other, she tightened her eyes, and I knew she was talking the truth. Whatever it was between us was roaring down the tracks and it knocked my bitterness out of the way like so much horse feathers."
Yeah, baby!
Posted by Unknown at 2:24 PM