"I never assumed ...an idea was so special that ...using it would guanantee the quality of the music." R Morris 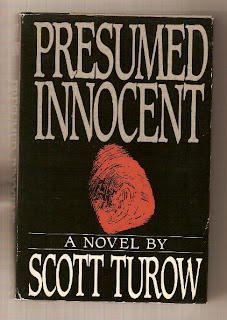 Raymond Hogan is running for re-election to the Kindle County Prosecutory's office. He is being challenged by Nico Della Guardia, who is winning the race.

Rusty Sabich is Hogan's deputy prosecutor and narrator of the story.

Carolyn Polhemus, a prosecutor in Hogan's office, is found raped and murdered. Since Hogan is busy with his campaign, he asks Rusty to run the investigation. Nico uses the fact that a member of Hogan's staff has died and that he hasn't found the murderer to move further ahead in the race.

As Rusty continues his narration, he tells us how uncaring and cold, his wife Barbara, has become. When she finds that Rusty is to head the investigation into Carolyn's murder, she admits that she knew Rusty had been seeing her and Barbara ask Rusty to move out of the house.

As the story continues, we follow Rusty's involvement with Carolyn and how she became the dominant one in the affair but then ended it abruptly. Rusty sees her with Hogan and asks if he also was sleeping with Carolyn.

In a contemporary manner, Rusty seems like a battlefield general whose superior has let him down, perhaps there is a comparison to one of the generals who had been in charge in Afghanistan.

This section ends with a very cinematic, suspenseful scene in Raymond Hogan's office. Hogan tells Rusty that he will be vacating his office almost immediately and an arrogant Tommy Moto, who is Nico's right hand man, tells Rusty that they will be inditing him and that he, Moto, has evidence that Rusty was in Carolyn's home on the night she was murdered.

The second half of the novel revolves around the trial. Rusty's defense attorney is Sandy Stern and he becomes one of Rusty's few friends, along with an investigator named Dan Lipranzer. Stern seems like a professorial and fatherly type and does a wonderful job defending Rusty.

The pacing of the novel was particularly well done. Rusty, is a stoic character and takes a back seat while other's defend him.

A most enjoyable and visual story with court scenes that will live on in the reader's memory.

After the court case came to a conclusion, there were an additional seventy pages explaining what happened and how Rusty and Barbara, and other characters continued with their lives. I felt that this segment of the novel too lengthy and it slowed down the effect of the story. Otherwise, this was an extremely readable and entertaining book.

Please check my review on Amazon.com and if you agree, please indicate that the review was helpful. Thanks.
http://www.amazon.com/review/R3153C86Z1Q79T/ref=cm_cr_rdp_perm
Posted by Unknown at 6:23 AM