"It's been a hard day's night and I've been working like a dog." Song lyrics 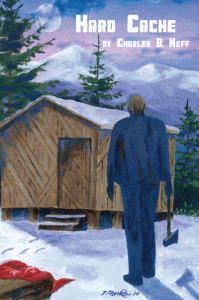 Magnus Torval, a recently retired police officer, is on vacation with his fiance, Mariela and they decide to get married at the last moment.
While fishing, he notices a blue piece of cloth that doesn't look right. With a closer look, he realizes that he's discovered a recently buried body.
When Greg Takarchuck learns of the body, he has two fears. The first is that his father hasn't been home for two days and it might be him, and secondly, if it is his father, Greg would be taken off the case. Soon after, Greg learns that his worst fears are met and it is his father's body.
In a story that is similar to Louise Penny's wonderful, "A Rule Against Murder" when the investigator is on a wedding anniversary trip and enters a murder investigation, in this novel, Magnus is supposed to be married in a few days and has to reassure Mariela that he's not going back on his plans to give up criminal investigations.
There is more to this novel then a simple murder. Greg Takarchuck and his parents are Ukrainians and Pentecostals. When thinking of a reason for the murder, Greg wonders if it could be for religious reasons or from his father's past military service.
As the two men think about the murder, Greg is put on compassionate leave and meets with Magnus. Greg tells Magnus about his father's service in Afghanistan while with the Soviet Army.
Soon after, a Russian businessman, Vladislav Ostrovsky, also known as Petrov, arrives and tells Greg that he wants to examine some of Greg's father's ledgers and that he, Petrov, was the supplier of the Russian antiques that Greg's father sold.
The novel is complex and well told. We learn that a number of the characters were members of a unit that was active during the Russian-Afghan war and that there was an incident during one of their missions. We also learn that Greg's father may have been selling stolen items.
How will the police determine who the killer is? Is it due to the Religious background, or something from the victim's past?
It is interesting to learn of actions of men of the Soviet Union and their experiences in Afghanistan as comparison to today's United States and NATO forces fighting a war in the mountains of that country.
I enjoyed the novel and learning about a part of Russian history and the artifacts that Greg's father was selling in his store. Part of the setting was in the mountains in Swiftwater, Washington and this was well described.
I would have given the novel a higher rating but as interesting as the story was, I didn't feel the suspense and felt that the story could have been condensed to make a more compact thriller.
Check out my amazon review and if you agree with it, please indicate that the review was helpful.
http://www.amazon.com/review/R2BPYKOMCK83DQ/ref=cm_cr_rdp_perm
Posted by Unknown at 7:26 AM