"When you're growing up in Brooklyn, the Bridge is like a friend." Barry Manilow 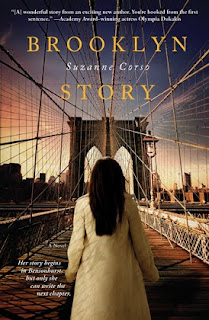 In August, 1978, Samantha Bonti, is a fifteen-year-old, living in Bensonhurst, Brooklyn with the dream of someday becoming a writer and crossing the Brooklyn Bridge to become a success in Manhattan.
Samantha "Sam" is half-Jewish, half-Catholic in a neighborhood that is predominantly Catholics of Italian heritage. She is sometimes shunned in this Italian neighborhood. Luckily, as she begins high school, she meets Janice Caputo, a senior at the school. Janice is street savvy and becomes Sam's best friend.
At the Feast of Santa Rosalia, mixed with the sound of the elevated subway and the sizzle and aroma of sausage and peppers, Janice introduces Sam to a twenty-year-old named Tony Kroon. Kroon is also of mixed heritage being Dutch-Italian. He is a construction worker with the muscles to prove it, along with his blond hair.
Sam becomes infatuated with Tony and believes that she has met her dream man. She writes about her experiences in the manuscript she is working on and feels a happiness unlike anything she's felt before. She is conscientious with Tony because of her sick mother and the fact that she and her mother live on Sam's grandmother's social security and Sam's mother's welfare checks.
Although happy in her relationship with Tony, Tony is controlling and wanting to advance their romance to a degree that Sam isn't ready for. She creates boundaries and demands his respect.
The novel continues with their relationship and the Italian friends of Tony who are obviously doing illegal things. When Tony begins spending large amounts of money on Sam, she is concerned where the money came from.
In a moving story, we see Tony go from the controlling person to steps in abuse and see what happens to Sam. She is a courageous person with dreams that won't be dimmed.
The dialogue is another strong point as is Sam's descriptions of her Brooklyn neighborhood. The novel is being developed into a movie and I can only hope that the movie is as good as the book.
This is a debut novel from an author of great promise. Recommended.
Posted by Unknown at 1:18 PM