"Insects, weeds and lawyers will inherit the earth." Oliver Webb 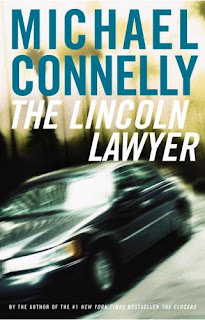 Mickey Haller seems to be a good man. Like anyone, he has his flaws and he does what he can to make a living as a defense attorney. At one point, he confides that his father, who was also an attorney, had a place in his heart to help the less fortunate. Many of these clients were women who resorted to prostitution as a desperate choice to survive. Mickey tries to follow his father's worthy example.

Mickey does much of his work from the back seat of his Lincoln. His driver, Earl, is working off his fee for Mickey's successful defense of a case against him.

As the story progresses, Mickey is asked to defend the wealthy Louis Roulet from the accusation of aggravated assault and attempted rape against Reggie Campo, a woman he had met in a bar.

From the start, Mickey is skeptical of Roulet when he catches the man in a number of lies about his past. Then, when Mickey sees a photo of Reggie, she bears a close resemblance to a woman that Mickey's former client Jesus Mendez, was sent to prison for killing.

Mendez maintained his innocence and now Mickey wonders if Mendez could really be innocent. Mickey visits Mendez in jail and brings a number of photos, one of which is Roulet. What Mickey learns is that he is now dealing with a truly evil person.

The novel proceeds as the author, Michael Connelly, sets the parts in motion as if he is directing a play. Roulet is able to create a special reason for Mickey to win the case and set him free but he also admits his past. Since there is attorney client privilege, Mickey cannot use this against Roulet.

To say the novel was well done is an understatement. The reader becomes involved in the story as it goes to trial as if the reader was sitting in the jury. We watch Mickey master the case breathlessly move on, wondering how he will provide justice to Roulet, a man he is defending.

This is a can't put down novel that has just opened as a movie.


Rules to win a hard cover copy of "The Lincoln Lawyer"
1. Be a follower of this blog
2. Use the above link and go to Amazon.com books. At the end when they ask if the review was helpful, indicate "YES'
3. Under comments of this blog, indicate you want to be included in the selection of the "giveaway" and add your email.

Hi Mike,
thanks for the email, I did as you asked in it, hope it will help :)

I'm really happy to hear the good news about your novel being published soon! I'm looking forward to reading it, maybe we can do some author interview or guest post in the future!

Congratulations on a great giveaway, I wouldn't pass a chance for winning A Lincoln Lawyer copy! Heard it's really good :)
So, count me in please!
I'm a follower, my email (which you already know) is evieseo(at)gmail(dot)com

Hey Mike I'm your newest follower! I hope you will follow me back at http://readerbetweenthecovers.blogspot.com

I saw the previews of the Lincoln Lawyer and was wondering what it was about. Your review has made me put it on my TBR list! Great Giveaway I want to win it! lol
Congrats on getting published.
I do hope you impress that agent your lookin for!

Great review! I would love to be included in the giveaway.
JChase2000(at)aol(dot)com

I got your email and checked yes for your reviews being helpful. I hope this helps you out.
I also did the same for Lincoln Lawyer.
I am a new follower.
Thanks for the giveaway!
bangersis(at)msn(dot)com

Thank you for inviting me to help you out. I enjoyed doing it for you.

Congratulations on your book being published. I wish you nothing but success with it. Also thank you for inviting me in on your Contest for The Lincoln Lawyer book.

I just saw the movie the other night, thought it was pretty good, held my attention the whole way through! I did stop by Amazon and voted up your review.

Thanks for stopping by my blog too! Congrats on your book!

Thanks for the heads up, this book is on both my husband's and my wish lists. I would love to win a copy and are definitely a follower!!

I checked "Yes" on your Amazon reviews. I wish you the best of luck with your novel.

Thanks for the chance!

I would appreciate being included in the giveaway. Great review, Mike. You do a good job.

Good reviews on Amazon. Hope it helps. I know it can take awhile to be published. A local book store (now closed) brought a lot of authors in and when talking with them many had stories of the long road to publishing. Good luck with your novel. I follow your blog and have posted comments on Amazon about them. Thanks for the contest.

I did as you asked.I am a new follower,the reveiw on Amazon was great and this book sounds very intersting.Would love to be a part of this giveaway and will write a review for it also.Congrats on the publishing of this book,how very ecxiting it all has to be.But I am sure it is a little scary also.

Hello Mike - Thanks for the email.
I did ask you asked, all three!
I would love to win this book, so please count me in.

I'll check to make sure I'm a follower. If you aren't of my blog already will you ?
DanceAlertReads.blogspot.com
dancealert at aol dot com

Cherry Mischievous
(not an entry)

Good luck with your book! I have marked the three reviews for you - they really were well-written and helpful.

Thanks for the giveaway!
Wendy
wendyhines at hotmail dot com

Hey Mike. I got your email and I did all those things you asked. You can count me in for the giveaway but only if it's international. Thanks and congrats on getting published. :)

Awesome review! Thank you for sharing and Thank you so much for the awesome opportunity!

I am a follower of the blog
I have indicated that the review was helpful :)

Hi, thanks for the giveaway! The review REALLY was helpful, LOL, and interesting. Please enter me in this giveaway. :)
kah_cherub@hotmail.com

I want to be included in the selection of the "giveaway"

Also a GFC follower and said 'yes' on Amazon.

Hi Mike,
thanks for the chance !!!

Please enter me in this giveaway. I'm a new GFC follower
and I checked "Yes" on your Amazon reviews. Good luck with your book.

Mike, Please include me in the give away for this book. thanks, Miriam
mirandell87@yahoo.com

Thanks for the email, Mike! Please count me in for the giveaway.

Hi
I 'liked' your review on Amazon but can't find your GFC widget to officially follow you so I added your blog to my RSS instead.