"Never put off until tomorrow what you can do the day after tomorrow." Mark Twain 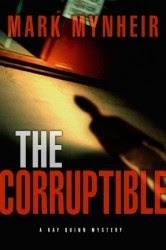 Ray Quinn is a former homicide detective who had to retire when he was injured. His injury necessitates that he use a cane while walking. He currently runs the Night Watchman Detective Agency.

Ray is hired by Armon Mayer to find an ex cop named Logan Ramsey who has stolen some of Mayer's client's personal and investment information. Since Mayer's firm is based on confidentiality of information, he wants Quinn to find Ramsey and return the information without publicity.
Accepting the job, Ray works with his young assistant, Crevis, who Ray is training to become a cop. Ray also has a part time employee, Pam, who tries to teach Crevis enough grammar to pass the written test for the police academy, which he has failed two times.
Conveniently, Ray is able to pull some favors on the case and is appointed a consultant by the police. Not long after this, Ramsey's body is found. Now the question is, who murdered Ramsey and what happened to the material he is supposed to have stolen from Mayer.

Ray is somewhat an interesting character. The story is like having the main character from TV's show, House. However, it is difficult to see how this man with a cane is able to get out of certain situations such as going to a clubhouse of a gang of bikers with Crevis but no police backup.
I enjoyed the novel but found the writing style lacking and some of the plot too convenient.
http://www.amazon.com/review/R2FP7FD6WVEQCT/ref=cm_cr_rdp_perm
Check out my Amazon review and if possible, indicate the review was helpful.
Posted by Unknown at 7:28 PM