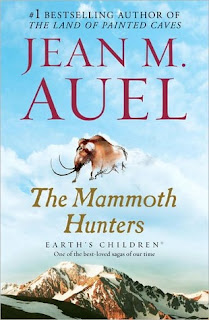 The action in "The Mammoth Hunters" continues the saga of earth's children and takes place over 25,000 years ago, during the Ice Age.

Ayla is traveling with Jandlar, a red haired man who she discovered in her journey and nursed back to health. The couple are lovers as well as fellow travelers. Ayla travels on a horse that she tamed named Winney. This is a time when people only thought of horses as food.

In their travels, the couple meet the Mamutoi, who are like Ayla and are Mammouth Hunters. When people in the village see that Ayla can control Winney by riding the horse and having the horse come when she whistles, some of the villages feel she has exceptional powers while others become distrustful of her.

There is also conflict. Ayla develops feelings for Ranec who is a carver of Ivory and artistic. Jandlar doesn't accept her feelings toward Ranec and shows is jealousy.

One of the points that the author makes is to accept others who are different. Ayla helps a six-year-old boy named Rydag who is half Clan and half other. He is a Flathead and is unable to speak. Ayla has the ability to communicate through signing and begins to teach Rydag sign language. In a significant part of the story, the boy realizes what Ayla is doing and begins to communicate. His first sign is "mother" to Nezzie who is delighted and tells Ayla that she never expected to communicate with her son.

This fictitious look at primitive history gives one more look at how things might have been during the ice age and shows readers how people from different races can come together and live in harmony. Thus, the story becomes very timely in today's political climate. Ayla is a heroic figure who is a born leader at a time that women weren't regarded highly. She stands out in her ability to communicate and feel empathy for others. Her wisdom is also enlightening.

Considering my love for the prehistoric period, I'm amazed I haven't delved into this series before. I think it's time to officially put it into the TBR pile. :)

Thanks for stopping by my blog!
You made my TBR longer! lol

Love the quote at the top! This book seems interesting. I like historical fiction as long as it can keep my attention and this sounds like it would.