"Every day is a winding road." song 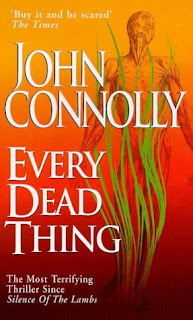 In one of the most exciting and suspenseful mystery debuts, John Connolly tells of former NYPD detective Charlie Parker's search for the deranged killer who mutilated and murdered Charlie's wife and daughter.

Trying to go on with his life after the gruesome killing of his family, Charlie is asked to find Catherine Demeter who was dating the woman who hired Charlie's step-son and has disappeared. As he searches, he meets a psychic. She tells him that she hears the cries of another young woman who died in the same manner as Charlie's wife and daughter.

Charlie travels to a town called Haven where Catherine Demeter was from. The people are trying to ignore the murders of a number of young children that happened in the past.  He's unwelcome in this town but continues his search for Catherine and uncovers facts about the murderers of the children who were still active.

The description of the characters and the heart beating pace of the story is so well done that it is difficult to pause from the dramatic events. The author provides a relief from this by periodically allowing the characters to reminisce about things in the past. This also serves as a way to develop the character and permit the reader to know them better.

In addition to the main story line, we have the underlying story of good versus evil. This is so much in evidence that at one point the killer's actions lead one character to speculate that the killer believes he is a representative of the devil.

This book is not for everyone but for those who want a story and enjoyed "The Silence of the Lambs," this book will be one that most readers won't forget.
Posted by Unknown at 12:35 PM

Wow sounds like a very interesting and intense story line, great review. I'm going to order this one right after I finish "Stolen Prey" which just arrived.

I will be getting this one. Nothing like a good thriller/mystery, this one sounds like something I would love. thanks for the review, not sure I would have found out about this book otherwise.