"You never give me a chance." Song lyrics 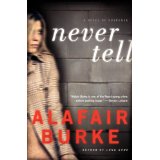 N.Y.P.D. detective Ellie Hatacher and her partner J. J. Rogan are called to the scene of an apparent suicide. The victim is age sixteen and from a wealthy and influential family.

Alafair Burke uses her knowledge of the streets of New York to create action that rolls out as if the reader was a pedestrian in the street or in Washington Square Park, listening to the sounds of laughter and watching the eccentricities of the cast of characters.

Ellie not only investigates the questionable suicide of this teenager but has flashbacks of her own policeman father who was found dead of an apparent self inflicted gunshot when Ellie was of an impressionable age. She considers if she "...could simply set aside her own past like a discarded shopping bag."

When Ellie talks of her youth and her hero father, she remembers the occasions when he'd discuss his work. We wonder if this could be anything like young Alafair Burke growing up with her own multiple award winning father, James Lee Burke.

The teenage children and their relationships with their parents are the heart of the story. Many of these teenagers have been cast aside by their parents and are attempting to live their lives on the streets.

Another important theme is the abuse of prescription drugs and antidepressants.

There is rich character development as the author deals with the teenagers and we learn of their histories and the background of some of the parents who seemed so perfectly situated in their world.

The author keeps the reader guessing through the intricacies of the story and the reader will shake their heads in appreciation of the author's writing skill as we read the concluding chapters of this entertaining story.
http://www.amazon.com/review/R3JFSME8BVC40V/ref=cm_cr_rdp_perm

Giveaway Rules:
1. there will be two winners
2. be a follower of this blog
3. use above link and see the Amazon review of the book and indicate the review was helpful.
4. leave email address and indicate steps 2 and 3 have been completed.
5. U.S. and Canada
6. Giveaway ends May 19
Posted by Unknown at 1:38 PM

I went to Amazon and marked your review as helpful. This sounds very interesting.

I am a follower and email subscriber. Please enter me in contest. I marked your review as helpful. Tore923@aol.com

This book sounds fantastic! Thanks so much for the giveaway!
GFC follower: Lauren Mackesy
email follower: Lmackesy @ gmail.com
I clicked on the amazon link.

Hope you are feeling better. Good job on the review. I liked the Amazon review and follow by email.

I'm a follower & marked your review as helpful on Amazon. Great job! This book has been on my wishlist for awhile now!

Hi, Mike, I love to read your reviews and love that you sent me a heads up on this giveaway. You're smart and brilliant at the same time!! :] I found the Amazon and this review helpful, and thank you for bringing it to my attention. I'd love to read it!
Deborah/TheBookishDame
I'm a follower of yours from Book Blogs
http://abookishlibraria.blogspot.com
thebookishdame@aol.com

Great review- I have been hearing a bit about this title.

I am an e-mail follower, and I also voted on Amazon.

Blog and email follower
I said your review was helpful on Amazon.
Thanks for the chance to win!
irbratb(@)gmail(.)com

I am a GFC Follower.

I marked your review as being helpful.

2 and 3 steps have been done.
Sounds like a good read.

Steps 2 and 3 have been completed.

Yet another good one from you, Mike. Thanks!

Jonathan @ I Read a Book Once

I am a follower via email ! Awesome book review and sounds great! Thanks for the email letting me know about it! I also marked Amazon as helpful.

i'm a follower, too!

I did step 2 & 3, I like all your reviews on amazon. I also shared on twitter and FB!

Nice review:)
Sounds good,i think i would enjoy reading it.
follower,loked on amazon too.
elliott2668(at)yahoo(dot)com

US
Thanks for the giveaway:)

Best wishes to those who won a copy of this book:
rubynreba and Lori.

Thanks for participating to everyone.