"In the bleak midwinter frosty wind made moan. Earth stood hard as iron...long ago." Poem 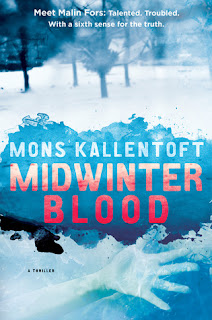 Malin Fors is a thirty-four-year old superintendent in the Linkoping, Sweden police department. She's alerted to attend the scene of a naked body of an obese man who had been tortured, murdered and then left hanging from a tree.

Linkoping is a small town surrounded by plains and forests. In some respects it seems as though time had stood still for some of the residents who kept memories of the past alive.

It is one of the coldest Februaries in memory with cars that refuse to start and people bundled in layers of clothes to stay warm.

The victim, Bengt Andersson was a man who was ignored by most people and teased by others due to his weight. He lived in an area that Malin describes, that includes "...scared kids, teased kids, never go to school kids. Alcoholic's kids."

The story is well told and unique in that we listen to segments from character's minds, even Bengt, telling things that he experienced in a manner that longed for a better world.

His father was cruel and ended up in jail leaving his mother to care for him by taking in sewing. When his father's jail term was over, he seemed to resent Bengt  and was abusive to him and to Bengt's mother.

The police procedural follows the search for a possible motive and a killer. One thought was that this was a ritual killing in Midwinter's Blood where people were sacrificed to gods.

The sadness of the unfortunate victim's life leaps from the pages. Unloved, with a cruel father, in and out of mental homes and killed for a reason the police have difficult in understanding.

This psychological thriller will have the reader glued to the pages. Malin Fors the kind of protagonist that the reader can enjoy. She has a teenage daughter that she is on good terms with and tends to work too long but her reason is to catch criminals and protect society.

The writing is smooth and when we hear the thoughts of various characters, it gives the reader a deeper understanding of the characters.

This is interesting. I was reading about this book just this morning. Decided not to request a review copy, not because it didn't sound good, because it does, but because I just didn't think I'd get to it in a timely fashion.

Christina Rosetti wrote "In the Bleak Midwinter." It was adapted as a Christmas carol sometime later. It is sung in most Episopal churches during the Christmas season.

Heather,
The publication date is this week and I'd recommend giving the book another look, it was most enjoyable and the author writes in a poetic, emotional manner that is captivating.

Deb,
I did know that Rosetti wrote "In the Bleak Midwinter" but couldn't get more info into the title.