"Why can't I free your doubtful mind and melt your cold cold heart." Song 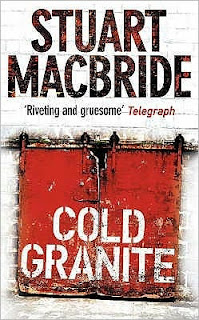 Granite City is in the vicinity of Aberdeen, Scotland.  The story opens with the body of a three-year-old child being found. David Reid had been strangled and murdered.  Since David had been missing for a time and was found to be dead for at least two months when his body was found, the police investigation was criticized for taking so long.

I've read five of these books. Very good (once you get past MacBride's habit of using the "an [adjective]-looking [noun], as in "a tired-looking woman" construction multiple times), but not for the faint of heart, especially FLESH HOUSE, which still gives me the creeps.

I've already written down "Dying Light" for my reading list. I think that's the second book in the series.

Yes, I would recommend reading them in order because of the changes in the dynamics amongst the major characters as the series progresses, particularly his boss, "Aunty Roberta" as she calls herself.

hmm, I don't know about this one. I have trouble reading books where little children are hurt. I know it's fiction, but it still bothers me.