I have often walked on this street before 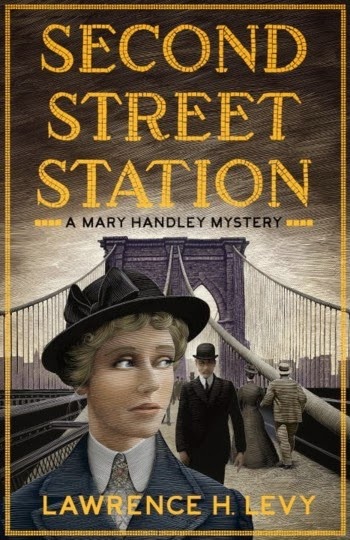 I'm sure I won't be the only one who picks "Second Street Station," as one of the best mystery novels of the early part of this year. It really was a special story and I was sorry to see it end.

Mary Handley was only twelve-years-old when she comes upon a man who is murdered in his compartment of a railroad train as it headed from Greenpoint to New York City.

The official report was suicide but Mary attempts to tell the police about a man in a Bowler Hat took something from the man's compartment so she thinks the man was murdered. But who listens to a twelve-year-old girl who might have a vivid imagination?

The story takes place in the late 19th century when women's rights were just getting recognized and sweatshop conditions were abundant..

Mary had been employed in the Lowry Hat Factory under an overbearing propritoress. When Mary asserted herself and complained about work conditions, she was fired.

This was a time that many people felt that a woman's place was in the home. That's the position Mary's mother takes, even dismissing Mary's talents and praising Mary's brother Sean in his career as a police officer.

Mary shows her intellect one day at Sean's police station. She observes something and saves another officer from a possible serious injury. This was when there were no women police personnel and the department had to get a civilian woman who worked next door to the station to search a female prisoner.

With the women's movement at full stride and with the death of a prominent man, Mary is given the job of finding the killer who was the former bookkeeper for Thomas Edison. She's hired by two police commissioners who believe she will fail and they can use her failure to their advantage.

The setting jumps from the pages of history and draws a picture of the times. Mary had taken martial arts training and surprises more than one man with her skill.

What also interested me was the depiction of Thomas Edison and J.P. Morgan. While not wanting to disclose plot, the legend of these two men might have to be revised due to this book.

There is also romance in the story and Mary's romance with the son of the man who invented coco cola was vastly entertaining.

With the story, the new look at certain historical personages and with the look at Brooklyn and Manhattan at the time, I would certainly rate this book as one not to be missed.

I received this book in return for my honest review.
Posted by Unknown at 9:52 AM

That book is already on my wish list!
Sounds good!

Wow—this sounds like a great read—thanks for the review, Mike!