David and Harriet Lovatt fall in love and marry when they are young. They enjoy life and family so much that they begin to have children immediately.

During that time, their home becomes a center of family activity. David's parents are divorced and remarried so both couples attend the various celebrations as does Harriet's mother and other family members.

Then, Harriet becomes pregnant for the fifth time. This baby was difficult even during Harriet's pregnancy. They decide to name him Ben.  Even when he was first born, he never cried and he ate vociferously. In addition, he had a frightful look that even his own siblings didn't want to be near him.

Doris Lessing admitted in an interview in the "New York Times" that she had written a "horror story." She wrote it once, she stated,  and felt that the original story was too soft so she rewrote it.

There may be symbolism in the story about the pain a woman might go through in the birth process and in raising a large family but given that, I found the second part of the story, once Ben was born, to be distasteful.

Other readers have commented 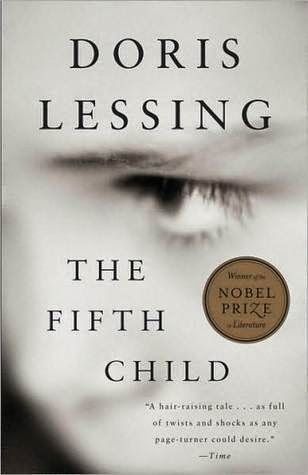 the book and Lessing is a great writer but this one just wasn't for me.
Posted by Unknown at 9:23 AM

It doesn't sound like it would be for me, either!

I agree, Kelly. Skip this one.