"I wish we could chat longer, but I'm having an old friend for dinner." Hannibal Lector

Joe Gunther is investigating the death of two men who appear to have nothing in common. However, after researching their history, he learns that they had both been using internet chat rooms. The men possessed child pornography on their computers. Joe and his unit of Vermont Special Investigators suspect that the men may have been lured to the area by someone seeing retribution for a past sexual attack.

Archer Mayor always adds other investigations to the investigators activities. In this manner, it seems that the author may have been influenced by the great Ed McBain and his police procedural novels.

In "Chat," Joe's brother is in a car accident in the beginning of the story. Joe's brother knows cars and he tells his brother that it wasn't his fault but something was wrong with the car. Joe's brother was with their mother when the accident took place. Joe's mother isn't badly injured, but his brother goes into a coma and the outcome is uncertain. While his brother is in the hospital, Joe and his unit investigate the auto mechanic and find that there is illegal activity going on there.

The plot moved along nicely and kept my attention throughout. The author provides a taste of life in Vermont. This is refreshing and always enjoyable.

Joe Gunther is a terrific protagonist. He's savvy, brave and a good administrator. He is also human and falls in love. He's surprised that a woman can find him desirable but appreciates the attention.

The other characters are equally well drawn and interesting.

The series never fails to entertain. 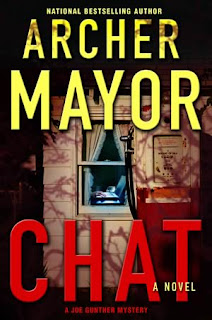