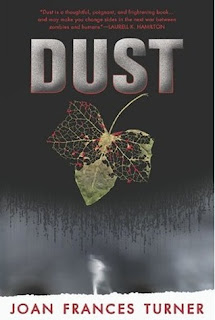 Giveaway: Please go to the end of this review for giveaway rules.

"My right arm fell off today. Lucky me, I'm left handed." So starts the story of Jessie Anne Porter. She was killed when she was a teenager and her father crashed into a pickup truck.

Jessie tells us that she remembers waking up in her casket and having to kick her way out and then crawl to the surface. Somehow she had become a zombie like creature. She notes that her stink didn't bother her but she was consumed with hunger and drawn to the scent of a rabbit that ran past in the cemetery.

Jessie joins a group of zombies, the Fly-by-Nights. Unlike traditional zombies, the mutated beings had human traits. Florian is ancient and philosophical, Teresa is the pack leader, she's territorial and demonstrates her jealousy.

When Jessie meets Joe, she describes him "...The ...right side of his face was smashed in ...crushed cheekbone...maggots seethed from every pore."

It demands a certain discipline for the uniniated to read a zombie story, I was constantly grossed out as in one point a large beetle emerged from one zombie as he made the transition from a bloater to a feeder.

A new illness is discovered which causes undead beings to grow new skin and muscle and become more lifelike. At the same time, humans or hoos become near death and often beg to be killed.

The story continues with groups of zombies attempting to gain power and humans to wipe out the zombies. Then this new illness seems like an epidemic and the reader must learn the effect on both groups.
Jessie and Florian are unique characters and the novel certainly should be ranked highly for originality and the telling of a tale.

GIVEAWAY RULES:
A: Be a follower of this blog
B: Use the above link to go to Amazon.com books and at the end of the Amazon review, when they ask if the review was helpful, please indicate "YES."
C: Under the comments of this review, please indicate that you wish to be included in the giveaway and leave your name and email address.
D: U.S. and Canadian residents only. Sorry.
E: Good luck

Wonderful review as usual Mike! I really admire your honesty in your reviews.

I'm usually turned off by attempts to humanize the classic monsters, but I do like the approach here, and I can see the necessity in humanizing the narrator - "Grunt, growl, brains . . . mmm" would make for a very short book. LOL

Count me in, Mike.

This type of book isn't what I normally read, but its still another great review from Mike.

Cool review Mike. I yes'ed your review on Amazon. Check out my current interview with Edie Ramer. Comment to win your choice of one of her three unique paranormals.
http://lauries-interviews.blogspot.com

I think it would be cool to win this book. Please enter me.
lauriej170@gmail.com

Yet another good review! I would LOVE to win this.

That's one killer of a starting line. Kinda tells me I really must read this book. I started over at Amazon and liked your review, then added it to my wishlist. Yes, already a follower

Please enter me in your contest, otherwise I'll have to order it.

Please include me in the giveaway.

-Blog Follower from USA
-Indicated review was helpful on Amazon

Sure I will play along in the book giveaway. Unfortunatly, on your page I can't see where to follow your blog. stepfordmomto2(at)yahoo(dot)com

Found it, didn't go down far enough on the page.

Nice review! I yes'ed that your review was helpful. I would like to participate in your giveaway!

Gotta love that first line! Thanks for droppin' by my blog and commenting on my review today.

I yes'd your review and would love to be included in this giveaway, thank you.

I'd love to be entered!
I am a follower.
I went to the amazon review and clicked "yes" that the review was helpful.
And, my email address is:

That was a very interesting review and while I am not into zombie books(at least not yet), this one seems a bit interesting.

I would love to be included in teh give-a-way!

Thanks for the chance!!

The first lines got me hooked! Please include me in your contest! Heading over to Amazon now! Thanks.
dkmtheriot@yahoo.com
Donna

Please include me in your giveaway. I follow your blog via GFC and indicated your review was helpful on Amazon.

Hi Mike,
Please include me in your giveaway. I'm a follower of your blog and your reviews are always helpful. Karen, kkappleby at msn dot com. Hope I'm the lucky one to win.

Thanks for sponsoring this giveaway.

I'm a follower and I said yes that your review was helpful! Great review!
Heather
hsemonick at gmail dot com

Checked yes that was helpful (and it was). It's not something I would have been interested in had you not explained it so well. Thanks. And I'm also now a follower of your blog on GFC as lewalk.

Read the review on amazon.com & clicked on yes indicating the review was helpful.

Please enter me in your contest to win Dust.

Live in the US.
nicolesender(at)yahoo(dot)com

Going by your review, this book sounds like its too gory for me... thanks for sharing your honest views!

Sounds great. Count me in please.

I followed all of your rules. Would you put the close date ate the end of the post please. I can't seem to find it.