"There's no arguing with him, if his pistol misses fire, he knocks you down with the but end." Oliver Goldsmith 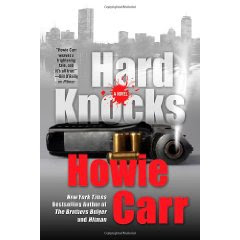 I'm drawn to the Boston setting and the Irish ex-cop who is the protagonist of "Hard Knocks."

Jack Reilly's brother, Marty, is in jail and Jack is trying to make a living as a P.I.

When the story opens, a former convict and friend of Jack's brother hires Jack for a $20.00 retainer and is gunned down soon after, outside the Irish -cop bar where the two men met.

One of Jack's former academy classmates, Plain View Evans, leads the investigation and doesn't mind letting it show that he believes that Jack is mixed up in a crime, possibly involving the mob.

Reilly had been a former driver for the mayor and is retired from the PD on a stress related disability. As he begins investigating, we cannot help but be reminded of another Boston P.I, Robert Parker's wonderful character, Spencer. The author also seems influenced by Mickey Spillane and, in Reilly, we see a new, and improved Mike Hammer.

Reilly is searching for something that the Mob wants, or at least, doesn't want anyone else to have. He's helped by an attractive reporter, Katy Bemis.

The humorous but complicated plot eventually comes together nicely and the reader is drawn into the action.

From the beginning, I was impressed with the realistic dialogue and setting of the Boston area filled with politicians on the take and corrupt lawmen.

The author is a columnist for the "Boston Herald" and has given the readers an interesting vision of the hard streets of Boston and a modern P.I. who knows how to survive within those mean streets.

Giveaway rules:
A: Be a follower of this blog.
B: Use above link to go to the Amazon review and at the end of the review, indicate 'YES' helpful.
C: Leave email address for contact and indicate that you have completed steps A and B
D: Giveaway ends Jan 23 at midnight.
E: U.S. and Canada

Hope you can join in and have fun.
Posted by Unknown at 1:06 PM

This sounds like a great book. Thanks for the giveaway. I voted on Amazon and I am a follower.

Thanks for the terrific review, Mike! I'm a HUGE Spencer fan, so I think I would really enjoy this book. I did A and B, and would love to be entered to win a copy of this book:)

Thank you for this Giveaway, Mike

Mixing humor with a PI sounds interesting.
Already a follower and voted.

I would love a chance to win this! I have taken the steps above.

Thanks for the heads up on this giveaway! Sounds like an interesting book!!

Thanks for the giveaway. Please enter me in contest. I am a follower and I voted on Amazon. Tore923@aol.com

This sounds fascinating! I commented as Hookedonbooks and am a follower.

Fantastic review. I haven't heard of this author before but sounds like I would enjoy this book. Thanks for the giveaway! :)

I love cops and PI books. They are usually good and this one sounds like a winner.
Clicked "YES" and left comment.

Thanks for the opportunity to win this great mystery, thriller.

Boston...Cops...Murder....Gesh, what more can a girl ask for :)
From the Amazon review and your blurb, I'd have to say it looks like a good book!
I've now become your newest stalker...lol GFC-BJ
and I've clicked yes on Amazon :0)

Thanks for the chance to win your book!
beejee77 at gmail dot com

Thanks for the giveaway... Following GFC as aprilharvell... clicked on Amazon as April Harvell
ramblingsandadventures(at)gmail(dot)com

I clicked on Yes on Amazon . I am a GFC follower and email subscriber to.
amhengst at verizon dot net

Congratulations to winners:
Heather
Holly
and Tore.
Hope you enjoy "Hard Knocks."
Thanks to everyone for participating.