A truth that's told with bad intent beats all the lies you can invent." Wm Blake 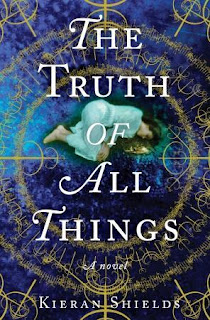 The novel describes events in 1892, in Portland Maine. Maggie Keene's body is found. It appears to be a ritualistic killing with her body posed in a certain manner, her right hand cut off and a pitch fork through her throat.

Deputy Marshall Archie Lean is the primary investigator but this case is like nothing he's ever seen. Dr. Virgil Steig asks one of his former students for help. Perceval Grey is a brilliant criminalist. He's part Abenaki Indian and a former Pinkerton agent.

There are a number of uncanny similarities in this plot to Matthew Pearl's recent novel, "The Technologists."

Where this novel takes place in Portland, Maine, in 1892, Pearl's mystery occurs in 1868 in Boston. Perceval Grey uses modern investigatory methods and possesses a unique understanding of people and possible motives. This is similar to Marcus Mansfield in Pearl's novel. Mansfield is about to graduate from Massachusetts Institute of Technology and is scientific in his work.

Both men are ahead of their time in the analytical approach to investigating and the use of modern scientific methods. In addition, there is a bright woman helping with the investigation in both novels and both novels bring in witchcraft as having something to do with the story.

In "The Truth of All Things, the author demonstrates his talent for describing his characters and making them believable and worthy of our interest. However it is more like learning about the characters from newspaper accounts so we're not drawn to particularly 'like' the characters.

The exception to this is Archie Lean. We become interested in him not only for his stick to it, investigation but we learn that he is expecting a child. I was drawn to his relationship with his wife as the new baby's birth nears. Their concern for their crowded home and the economics of an expanding family are subjects that could be taken out of today's newspapers.

Helen Prescott assists the investigators considerably. She is a historian, knowledgeable in the history of the Salem witch trials. She is a modern woman of her day and doesn't let the other characters tell her what to do.

It is the connection to the Salem witch history that sets this novel apart. We are given information on the names of those tried and why they were accused of being witches. This is tied in nicely with the crimes of 1892.

The action evolves slowly, sometimes exasperatingly so as the investigators sift through one cue after another. However it all comes together nicely with a suspenseful conclusion.

Giveaway for blog followers only:
1. use above link to see Amazon review and indicater review was helpful.
2. leave email address for contact and indicate step 1 completed.
3. U.S. and Canada only
4. This is for an advanced review copy
5. giveaway ends Feb 101h.
Posted by Unknown at 7:15 AM

I would LOVE to read this!
Thanks Mike!!
I also completed Step 1 :)
Jennifer @Can't Put It Down
cantputitdownreviews(at)gmail(dot)com

Thanks for your well balanced review, Mike. Just about every book has some cons, and I really appreciate a reviewer who tells it like it is.

I read you review on amazon and indicated the review was helpful.

Blessings to you and Diana,
Patricia

Hi Mike- Great review. Doing everything required. I also have some giveaways on my blog - does your wife bake? Donna

This sounds like a book I would really enjoy!

I am a follower and email subscriber. Please enter me in contest. I said yes.

This sounds like an awesome book!! Thanks so much for the review and giveaway:)
I indicated that your review was helpful and I am a follower!

Thanks for the giveaway Mike. Read the review on Amazon and answered yes. What a great review.

I'd enjoy this book. I did step 1 and I am a follower.
pbclark(at)netins(dot)net

Wow this story sounds good! I Would love to read it.
I completed step 1.

thanks for the opportunity to read this fabulous novel, mike.

This book sounds great! Thanks for the review!

I clicked that your review was helpful. This sounds like my kind of book!

Hi, Mike -
Read your review here and on Amazon, and I did say that 'yes' your review was helpful.
Thank you for this ARC Giveaway, Mike.

Thanks for doing the giveaway.

Thanks for the giveaway--nice review!

This sounds like an exciting read and a great subject. Knowing there is some truth to it makes it even more enjoyable. Great review.

Thanks for your marvelous posting! I certainly enjoyed reading it,
you might be a great author.I will be sure to bookmark your blog and will come back someday.
I want to encourage one to continue your great work, have a
nice evening!