"Fault Line" has a minor fault 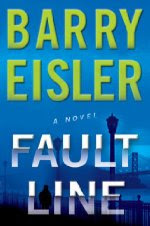 Alex Treven has risen far in his law firm but now he has a chance for full partnership. He's met with an inventor, Richard Hilzoy, whose invention may change encryption for everyone.
Alex asks his superior, David Osborne, if the partnership will back the project and David agrees. He asks that Alex work with Sarah Hosseini, a young Iranian attorney in the office.
Just before Hilzoy comes in to sign contract papers, he's killed. Then the patent examiner dies suddenly and Alex is attacked at his home. He's fearful and asks his brother, Ben, for help.
Ben is a Jack Reacher type character. He works for the military taking out foreign assets who may present a problem to the country. When Ben arrives home, they go to Alex's office where they find that the inventors papers are missing. Ben tells Alex and Sarah that they be in danger and to go into hiding and see if they can reconstruct the information from papers Hilzoy kept in a hidden place. After that, Ben does his thing. He finds the people following Alex and then tries to find who is behind the murders.

The first part of the novel was well written and the suspense worked well. In the second part, the story bogged down. The characterization of Alex, Sarah and Ben left much unsaid. Ben was just too convenient and there was too much info on the technical parts of the invention. This was confusing.
Eisler's John Rain novels are outstanding and he has received the Gumshoe award and the Barry Award for Best Thriller of the Year.
His first novel in the John Rain series, "Rain Fall," 2002, has been made into a motion picture and is scheduled for release in 2009.
Posted by Unknown at 12:48 PM