Not one of Baldacci's best

Ex CIA agents Sean King and Michelle Maxwell are asked to meet Pam Dutton, who wants to hire them.
When they arrive at her home, someone has murdered her and kidnapped her daughter, Willa. Willa is the First Lady's niece and she hires Sean and Michelle to find Willa.

Sam Quarry, a fanatic, is behind the kidnapping. he sent his son, Daryl, and a man named Kurt to carry out his orders. When Pam Dutton fought back, Daryl killed her by mistake. Quarry wants to make the two men pay for their mistake but can't discipline his son so Quarry kills Kurt, as a lesson.

Sean and Michelle are told that Pam's husband has been having an affair. This could be the reason to stage the kidnapping and have Pam killed so Sean checks it out. Meanwhile, Michelle gets a call that her mother has just died. She returns to her parent's home to find that her mother was murdered, so stays home to investigate that crime.

Quarry has also kidnapped another woman, Diane Wohl and the two kidnappers spend time together. Later, Sam tells Diane that she is actually Willa's mother, the child she put up for adoption twelve years ago.

The story takes a long time to develop and the reader must put up with the sub plot around Michelle's mother's murder. This takes away from the suspense of the kidnapping and adds confusion. This is the fourth Baldacci novel involving King and Maxwell, the last being, "Simple Justice." In this story King and Maxwell do not evoke sympathy. Sean clashes with CIA and FBI investigators who are also attempting to find Willa. The all knowing private investigator and the stiff, inflexible federal agents has been done too many times and doesn't come off in this story. Willa, is a charmer and was an excellent character.

Overall, not one of Baldacci's better novels but still enjoyable. 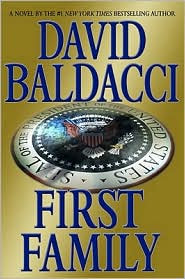