A child shall lead them. 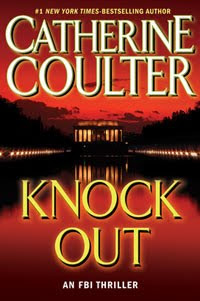 In "Knock Out: An FBI Thriller," a seven year old girl, Autumn Backman, contacts FBI Special Agent Dillon Savich after seeing him on TV. Dillon stopped a bank robbery and shot one of the robbers as she was about to execute the bank guard. Autumn is able to communicate with Dillon telepathically.
In Titusville, VA., Autumn runs away and hides in Sheriff Ethan Merriweather's home. She tells Ethan that a man named Blessed is after her and her mother, Joanna. She also warns Ethan not to look into Blessed's eyes because if a person looks Blessed in the eye, Blessed can control their thoughts.
We learn that Blessed is Autumn's uncle and with Autumn's telepathic ability and his mind control talent, he thinks he can be of use to the family.
Savich continues to hunt for Autumn but one robber who escaped the bank and the person in the get away car return to Savich's home to take revenge on him for killing the girl's mother. However, FBI agents were staking out Savich's home and the two outlaws barely escape.
"Knock Out" is a fun read. The action never stops and the reader is caught up in the excitement. The author states that she is influenced by Agatha Christie and Michael Connelly, among others; however, in this novel, I see an influence of Stephen King, particularly in his novel "Firestarter."
Hop aboard for the ride, you'll enjoy it.
Posted by Unknown at 6:23 PM