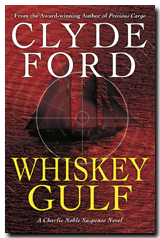 Mayday! Mayday! A report goes out to the Coast Guard. Suddenly, silence...There's a military exercise in the area of Whiskey Gulf and all boats were warned to stay clear.
Marine private investigator Charlie Noble is asked to find out what happened to the people on board the boat.
Whiskey Gulf is a waterway on the boarder of United States and Canada near Vancouver Island. Charlie's inquiries are stonewalled in both countries. However, he meets an investigative reporter, Maya Shimazu who has written an article about the missing boat. She believes she has info about the boat and goes with Charlie to the area where the boat went lost. They find pieces of fibreglass with explosive burn marks on the edges. Suddenly they are startled to see a torpedo speed through the water near their boat.
They make it back and Charlie continues his inquiries with the help of an American Indian, who goes by the name Raven. His inquiry will be to see what happened to the people and why both countries are ignoring his request for more information.
There is excessive technical information in this novel. So much so that I felt I was taking a course in seamanship. In addition the reader was given pages upon pages of detail about the history of the area and of the legend behind the mountains. This was distracting and lessened the flow of the story. Charlie never became a sympathetic character and the reader was kept out of what had happened to the people in the boat for so long that I didn't care why they were missing to begin with.
Posted by Unknown at 9:55 AM