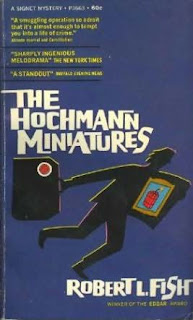 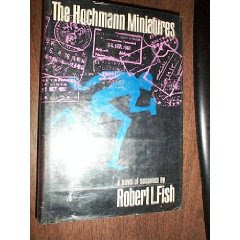 The year is 1954, Kek Huuygens is a smuggler. He gets a call from a friend from the Resistance that a fugitive and his wife need a first rate smuggler.
Fifteen years ago, before Kek changed his name, he worked in the Resistance. SS Colonel Wilhelm Gruber murdered Kek's parents and sister in reprisal for Kek's killing a
German soldier. Since Kek was being hunted, he had to leave the area and his girlfriend behind. To make matters worse, Gruber then married Kek's old girlfriend.
Now Kek learns that the fugitive is Gruber. He wants to escape from Portugal and smuggle his art collection with him. Kek works with the two men who worked with him in the Resistance, Michael Morell and Andre. They plan how to take their revenge.
This plot based story has little suspense. It is interesting from a historical point of view and to see how things have changed in the last 50 years.
"The Hochmann Miniatures" was nominated for an Edgar Award for best short story in 1967. It was originally published in "Argosy" in 1966.
Posted by Unknown at 7:13 PM