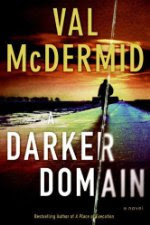 With the popularity of cold case crimes on TV and in the theater, Val McDermid has given us a double with "A Darker Domain".
Det. Inspector Karen Pirie and Det. Sgt. Phil Parchatka of the cold case squad are asked to find a man who has been missing since 1984.
Michelle "Misha" Gibson is searching for her dad, Mitch Prentice, as a possible bone marrow donor to save her son, Luke, who has Faconi Anemia. Misha explains that the reason that she and her mother, Jenny, didn't report Mitch missing sooner was that he supposedly became a strike breaker in the miner's strike of 1984. Since the family was such a staunch supporter of the strikers, Mitch's move to join the strike breakers was seen as an act of betrayal and they didn't want to have anything to do with him.
While Karen is starting her search for Mitch, she's ordered by her superior to the home of Sir. Broderick Grant, one of the wealthiest men in Scotland. Grant's daughter, Cat, and her son were kidnapped in 1984. Grant has a controlling personality and used his influence to go to the payoff. He also brought his gun. Something got mixed up and when Cat went to get the money, there were a number of shots and she was killed. Her son was never found.
Now a tourist, Bel Richmond, is on vacation in Tuscany. While jogging she comes to an old villa and decides to inspect it. She finds some important evidence about the kidnapping. However, before sharing it with Grant, she wants an exclusive. He agrees and she does more snooping in the Tuscany area.
The two cases begin to converge. Bel is concentrating on the kidnapping while Karen searches for the missing person. With the use of flashbacks, we learn what the characters were doing back in 1984. This also helps the character development. With a multitude of characters, the plot sometimes became mired down, however, the pace picked up and the conclusion was packed with suspense.
Although the author often writes novels with ongoing characters, this is a stand alone novel. Karen Pirie was an excellent character, strong yet compassionate. I would hope to see her again and find if the relationship she has with her Sgt. develops into something more.
Posted by Unknown at 6:40 AM