"This love will last...I'll be faithful to you." Song Lyrics 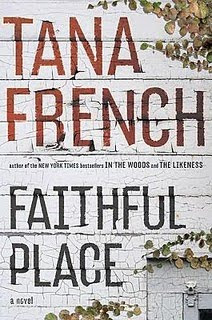 With all of the publicity of Tana French's "Faithful Place," I was anxious to read it. The promise of a story based on a dysfunctional family in Dublin, Ireland, fascinated me.
This story describes a family with an abusive, alcoholic father and a mother who acts like a mob boss in her own home. There are antagonistic feelings between the adult children and everything is cloaked in the extreme poverty of suburban Dublin.
When he was age nineteen, Frank Mackey snuck out of his house and went to meet his girlfriend, Rosie Daly. The couple planned to travel to London and get married.
Rosie never arrived. Despondent, Frank couldn't face returning home and moved in with a group of rockers. Later he applied for cop college and went into training.
Since Rosie had left a note that she'd return some day, Frank kept her in his heart and never found anyone that he loved as much as Rosie.
A quarter of a century later, Rosie's suitcase is found hidden in an old house and Frank decides t look into the matter himself. Then, confirming his worst fear, a decomposed body is found.
As with the author's other work, this is a literary, plot driven novel. We observe life in a family that has more than its share of issues and see how Frank looks into his past while attempting to deal with his feelings toward his family and the life he could have had.
Even though Frank is a dark character and the novel slowed down toward the middle, I felt compelled by this story and wanted to see how the mystery was resolved.
http://www.amazon.com/review/R17948Z9XZSYYB/ref=cm_cr_rdp_perm
Check out my Amazon review and if you agree that it is, please indicate that it was helpful.
Posted by Unknown at 6:18 AM

Hi Mike: I just started reading this yesterday. So far so good. I am really enjoying this read even though I am not that far into it

Hi! I found you on Amazon while reading a book review. Nice blog.
I also review books.
http://sharonhenning.blogspot.com

This is on my list to read. Great review. Thanks for stopping by my blog.