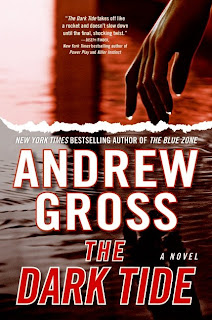 "The Dark Tide" by Andrew Gross

Charles Friedman runs a hedge fund dealing with considerable amounts of money and some questionable investors. One day he decides to take the Metro into New York from his home in Greenwich, CT.
That's the day terrorists blow up the train.

The same day there is a hit and run in Greenwich and the victim has Charles name and cell phone number in his pocket.

Karen Friedman is soon visited by two men threatening her and looking for unaccountable money Charles was responsible for. Then on the one year anniversary of the bombing, Karen watches the old news and sees her husband leaving the train station covered with soot.

Gross does a fantastic job with this novel. His talent toward building suspense and keeping the action going is unsurpassed. The characters were well drawn although I question Charles' motivation in some of his decision making.

My heart was racing so much in this story that I was afraid I was going to need medication to calm down. This is my pick for Thriller of the Year.