Read this novel or you'll miss a great book. 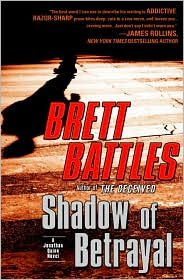 Jonathan Quinn is back after the author's well received "The Deceived" and his "The Closer."
Quinn is still working off his debt to Peter and is asked to oversee an informational exchange in Ireland. Terrorists are up to something and the exchange is to tell more of their intentions.
The exchange is botched.
In Africa, U.N. worker, Marion Dupuis, discovered an orphanage called Roslyn's Place. She decides to help and is influential in getting food and school supplies. Roslyn tells her that the rebel soldiers are approaching and they want to take one of the children, Iris, a Down Syndrome child of 5 years of age.
Marion finds that children from other countries with special needs have been disappearing. She takes Iris and goes into hiding.
Something happens to a governmental agent in Manhattan and Peter asks Quinn to find Marion and see why the other side, an organization called LP wants Marion.
In Montreal the terrorists achieve their goal. Marion and Iris are transported to California where Iris is to have an important part in the terrorist scheme.
This is a nice story that unfolds like the skin of an onion, layer by layer. It unfolds slowly but patience is rewarded and Brett Battles weaves the plot professionally.
In his biography, Battles tells us that he has been influenced by Alistair MacLean and Jack Higgins. It is easy to see that influence in the action, dialogue and suspense.
In California, Quinn and his team confront the terrorists and once more Battles has them overcoming great odds to achieve their mission.
Don't miss this one!
Posted by Unknown at 4:44 PM

Hello Mike, I'm Maria, and I'd like to contact you about some local banking information in Guilford, CT, but can't find your email address through your blog. Please could you drop me an email at maria@conversify.net?
Thank you!