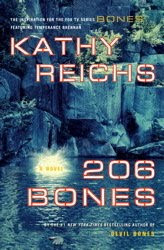 Officials ask Dr. Temperance Brennan's help with the body of a missing heiress, Rose Jermain. Temp's finding was that the woman died from hypothermia and was not the victim of foul play.
However, an anonymous phone call is received by the dead woman's father, alleging that Temp deliberately falsified the autopsy report. Temp defends her findings and is told that she has an enemy and it would be in her benefit to find out who.
The plot driven story weaves between Temp's current status where she is bound and locked in a small space, attempting to figure out how she got there and how she might escape and the events that led up to her predicament.
The early events include when the bodies of a number of elderly women are found and she must analyze and help determine the manner of death. Brennan and Lt. Ryan wonder if they are dealing with a serial killed of elderly women.
Complicating the situation is that as Temp is attempting to help the police by determining the cause of death and help find the killer of these women, someone seems to be sabotaging her work. The varmint who is doing this is fairly predictable but watching Temp figure out who it is, is still fun.
Kathy Reich's continues the story line with Brennan and with the TV show, "Bones." Reich presents the reader with enjoyable plots and situations for her heroine to work her way out of. Brennan is so real that the reader agonizes with her as her superior informs her that she missed a vital clue and a junior member of the team found it and received praise for her finding.
There also a nice chemistry between Temp and Lt. Ryan. I enjoyed this work and continue to appreciate the excellence of the author.
Posted by Unknown at 8:07 PM