"The ink of a scholar is more sacred than the blood of a martyr." Mohammed 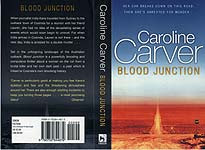 As "Blood Junction" begins, the reader experiences that tragic manner in which the area got its nick name.
In present day, India Kane travels to this rural area in Australia to meet her friend Lauren for a mini vacation. India's car breaks down in a desolate part of the desert and she gets a ride to town with Terence Dunn. She stays at a local ranch that night and in the morning, the police storm in and arrest her for killing Dunn and her friend Lauren.
The police attempt to coerce a confession through barbaric manners. India maintains her innocence and she is finally permitted to leave the jail when an unknown person provides her bail. After that India, former police officer, Mickey Johnson and Det. Jeremy Whitelaw, an Aborigine, investigate the killings.
Through a complex plot and many suspects, the story continues and the reader learns of a scheme to eliminate the Aborigine race. Although hard to believe, the author gives the facts in such manner that the scenario is believable.
The hunt for the killers is dramatic and suspenseful. We also learn a secret of why India was asked to come to this place by her friend, Lauren. This secret centers on much of the story.
The plot is on the grand scale and entertaining. India as a character is an enticing heroine who is gutsy and determined. In addition, the author's description of the sparse Australian country and the people was well done.
Posted by Unknown at 12:19 PM