"There are three kinds of lies: lies, damned lies and statistics..." Disraeli 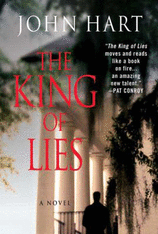 As much as "The King of Lies" is a mystery, it is also a family chronicle. In the North Carolina setting as Work Pickens travels to the countryside, to see his love, Vanessa, this reader felt an influence of fellow North Carolinian, Charles Frazier and is excellent "Cold Mountain."

Work Pickens is a defense attorney in Rowan County, North Carolina. He's called out of court and informed that his father's body has been found. Work's father, Ezra, a powerful but universally disliked man, has been missing for approximately two years. When Ezra's body is found, the story begins to spin.

The night, Ezra was last seen, the delicate family balance was destroyed. Certain facts about Work's sister, Jean, and her female companion, Alex, came to light. A physical confrontation developed between the controlling Ezra and Jean. Jean's mother attempted to intervene and Ezra pushed her aside. This caused Jean's mother to fall down the stairs to her death.

What's left of the family's mental strength disintegrates. Ezra takes a phone call and leaves the house, never to be seen again. Jean, suicidal to begin with, becomes more unhinged and Work becomes guilt-ridden that he hadn't acted to defend his sister or reveal to the public that his father caused his mother's death.

The author was nominated for an Edgar, Barry, Macavity and Anthony award for this novel. His follow up, "Down River" won the Edgar award for best mystery novel of the year.
Work is a man with human weakness. He's not a hard worker and doesn't love his wife but is reluctant to call off his marriage and make a new life with the woman he really loves. The female characters are not as strong. Work's wife, Barbara, his sister and his girlfriend, Vanessa are women who have been manipulated throughout their lives.

The story is told with a literary excellence and both the story and Work Pickens will remain in the reader's thoughts long after the book finds its place on the book shelves.
Posted by Unknown at 11:20 AM