"I'd like to take each day at a time but sometimes several days attack me at once." Jennifer. Unlimited 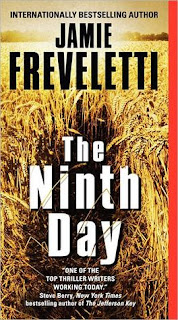 Biochemist Emma Coldridge is in Arizona by the Mexican border. As a chemist for a lab that makes cosmetics, she's been looking for night blooming plants. Unexpectedly, she comes upon a stash of marijuana. Before she can make her escape, she's spotted and brought to the leader of the drug gang.

The the leader, Raoul LaValle, learns that she's a chemist, he informs her that his marijuana fields are infected. People who have come in contact with he plant are infected by a flesh eating toxin that brings a miserable death within nine days of exposure.

Emma is an ultra marathon runner and feels that she can escape and inform the authorities but she feels sympathy for the migrant workers who are forced to work in the fields and harvest the infected plants and she wants to save them.

She comes in contact with a college drop out, Oz Kroger who wanted to transport some drugs to earn money but is a man of conscience and when he sees the disease the plants carry, he decides that he wants to help Emma.

The story is well told, and the author provides enough evidence about chemistry and disease that the reader is convinced of the possibility of this really happening.

The drug dealers are truly villainous and the author gives a good point that in Mexico people really don't know who to trust. Were authorities acting on their own or are they hired by a competing cartel in order to take over the first cartel's drug operation.

The concept of the novel is original but the plotting could have been a bit stronger as Emma attempts to make her escape and a cat and mouse game begins. However, the reader does become emotionally involved and lost in the action as the chase is for life or death.

Terrorism by marijuana - sounds quite original.

GIVEAWAY RULES:
I am a follower of this blog

what a twisted story. sounds good. I said it was helpful.

GFC follower
and liked the review on Amazon also

To be honest... I don't think I want this book! I barely got through your review!!

Ha, I evidently read your post back on 10/31 and did not even realize it was an awesome giveaway until today when I scanned down and wondered if I had entered this one. I have deleted my previous comment "Well it certainly sounds like there is some intrigue going on here. Thanks for sharing, I think I will check this one out :)" and will expand it by stating I did check out The Ninth Day and am even more intrigued than I was a week ago. I would love to read it and am ready for what sounds like a real adrenalin rush of a ride. I checked out your review on Amazon and am starting to feel redundant when I say, your reviews are awesome and I enjoy them very much. I did hit yes that it was helpful because it was :) Thank you for sharing this very interesting book with me and for the awesome giveaway opportunity. I am a follower of your site, but do not understand the Shelfari thingy and will continue to read your posts, which is definitely enjoyable for me.

i'm a follower of your blog that completed part C and answered yes to your amazon review. thanks!

Indicated "YES" on your Amazon review.

This is such a large problem today. Sadly, a crop being sprayed with chemicals or other agents isn't that far fetched. Remember Agent Orange? With all the kidnappings and murders on the border, we are obviously dealing with a vicious, immoral group of people who do not value life. I am not familiar with the author, but am always looking for new ones tor try.

This one sounds really good, Mike! I liked your review on Amazon and left a comment there as well.

Thanks for the giveaway!

Best wishes and happy reading to Ann as winner of this giveaway.

Get daily ideas and instructions for making THOUSANDS OF DOLLARS per day ONLINE totally FREE.
GET FREE ACCESS NOW