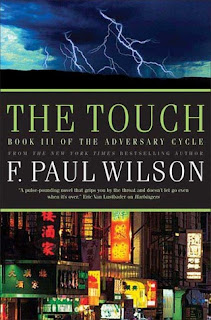 A doctor is grasped by a man thought to be deranged, while the doctor was making rounds at the hospital. He feels a shock and soon finds that when he touches people who are sick, they become miraculously healed.

Dr. Alan Bulmer is an old time family physician who delights with the personal touch and feels that getting to know his patients helps in the healing process.

When he notices this ability to heal by touching others, he tries to downplay his wondrous medical talent but as word spreads, people bombard his office and he has little peach. He can only use his ability for a limited time daily and when he is unable to help some people, there are occasions when the people become enraged.

His marriage is affected and only a few people stand by him as some people begin to call him a charlatan pretending to be a faith healer.

What a wonderful idea for the terminal ill to have a miracle cure and a second chance at life. This is an heart warming story were the author builds suspense nicely and spices his story with some very unique characters.

The conclusion was somewhat predictable but nevertheless, "The Touch" was a good read that won't be forgotten.
Posted by Unknown at 7:49 AM

Thanks, Tea, wouldn't it be nice if someone had this gift and could cure people with illnesses they thought were incurable?
Mike

People's beliefs can be so important in self healing! Very interesting book and review.

I need for this doctor to visit with my dad right now. Sounds like I would enjoy this book. An adding it to my list. Thanks.

Always a great read - I can still remember the first time I read The Keep . . . I was just blown away!