"The Big Thaw" Perfect for a summer day.

Deputy. Sheriff Carl Houseman thinks he's going to investigate a home burglary but finds the two robbers shot execution style in the home of a wealthy farmer who was in Florida at the time of the shooting.
Cletus Borglan is the farmer and he's into the rights movement. There are implications of one of the anti government civil rights programs.
As the investigation slows down, Carl and one of his men spot a snowmobile driven by a man wearing night goggles and when they stop him and he puts up a fight they find he is an FBI agent acting under cover.

When the Agent in Charge of the area FBI arrives at Carl's office, he tells the police that he's been tracing a man called Gabriel, aka, John Henry Nieuhauser, a bank robber who is planning on robbing 5 banks in the area. Gabriel has killed one police officer and was in the home of Borglan when the burglary took place.

Harstad's writing style is vivid and picturesque. It's easy for the reader to imagine the scenes as they unfold almost as if watching the story on a movie screen.
Houseman is an interesting lead character, I picture him as a John Goodman. Humorous and likable. He's knowledgeable about the law but also flawed. It is also interesting to read about the effect on Houseman's family life due to the time spent away from them while investigating a double murder.
The plot meanders a bit toward the end but overall a fun read. 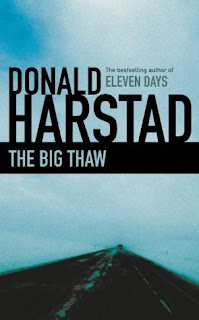